The real Mall of America is open for business.

In 1868, Brigham Young encouraged Mormon merchants to band together in a cooperative enterprise in order to promote local manufacturing and combat outside influences. More than thirty stores joined the New Zion’s Cooperative Mercantile Association (ZCMI). Other merchants, including some Mormons, objected to religious interference in commerce and encouraged rival businesses.

I sat down for lunch in front of a glass wall that reached from the bottom of the first floor to the ceiling of the second. On one side, a waterfall cascaded down over a man-made rocky cliff. On the other, the dining-room floor bustled with the energy and din of a stream of passersby — some transfixed on the water falling outside, others struggling to fight their way through the current of foot traffic. The scene could be imagined as an upbeat interpretation on the former Okada restaurant inside Las Vegas’ Wynn hotel, whereas the food, well …

Was it a sandwich from Chick-Fil-A?

A calzone from Sbarro?

Come to think of it, it might have been a Big Mac with fries — hey, check it out, there’s a mini-waterfall in front of the McDonald’s too.

The exact details of this meal blended together in my memory like the restaurants inside the food court at City Creek Center, the brand-new temple in downtown Salt Lake City. This temple glistens just as much as the one across the street, one that is most modestly termed a “church.” City Creek could easily be mistaken for a “mall,” but it’s more than that.

“I think this is a completely unique experience,” said Bob Taubman, who is as correct as he is biased.

Taubman is the President and CEO of Taubman Centers Inc., a real estate investment trust that owns, leases or manages 27 retail properties in the United States. City Creek is the largest mall Taubman will open this year. Actually, it’s the largest mall anyone in the country will open this year, and the first enclosed regional shopping center to open in the U.S. in six years.

As a resident of Los Angeles, I should know something about malls. This one features elements of Americana in Glendale (the seamless blend of high-end business and residential units), The Grove in L.A.’s Fairfax District (animated fountains, false-front retail stores) and even Vegas’ famed Strip. The same team that dreamed up the choreographed fountain displays in front of the Bellagio Hotel and Casino designed the smaller version here.

So maybe you’ve seen this before — parts of it, at least — but you haven’t seen it in Utah. No one has.

“It’s very indigenous in every way,” Taubman said. “The whole idea of architectural features, wildlife, trees, all of that is indigenous.”

The history of the Mormon religion is uniquely intertwined with capitalism, a relationship that predates Bryan v. Itasca County — the Supreme Court decision that effectively legalized Indian gaming — by more than a century. In fact, one of the first department stores in the U.S. belonged to the ZCMI. (The next time you become engulfed in esters at an indoor perfume counter, give partial credit to Brigham Young.) It was considered so important to the city’s fabric, a faded-brick ZCMI storefront was conspicuously incorporated into the new City Creek structure.

The price tag on the City Creek project was $1.5 billion, slightly more than the Los Angeles Dodgers and slightly less than the gross domestic product of Fiji. Its sponsors claim that no taxpayer money was used to fund the project. Instead, it relied on the largest private institution in town, whose international headquarters are conveniently located down the street: The Church of Jesus Christ of Latter-Day Saints (LDS).

Thomas Monson, the Church’s president, said at the City Creek ribbon-cutting ceremony on March 22 that the project reflected the “unwavering commitment” of his church to Salt Lake City. He quoted Young, the city’s founder and the Church’s second president: “This is the right place.”

Talking to a few locals, an underlying theme emerged: This was a downtown in need of revival.

Scot Proctor is the publisher of Meridian Magazine, a widely read periodical within the church. Proctor began our conversation by making a Mormon joke, noting how a bronze statue of Brigham Young on Main Street has turned his back to the church and extended his left hand toward a bank.

The way Proctor told the story of City Creek’s origin, I was reminded of the philosophy behind Indian tribal casinos: The LDS Temple is sacred ground. When the economy turned south in recent years, businesses packed up and left, and urban blight began encroaching on the Mormons’ holy, elaborate home base. The idea for a mixed-use complex was hatched nearly 10 years ago, and construction on the project began in 2006.

“It wasn’t graffitied,” he said. “It wasn’t trashed but, yeah, it was boarded up.”

So this wasn’t Times Square in the 1980s. But perception is reality. Downtown Salt Lake City has always had its attractions: The Mormon Tabernacle and its famous choir, an unparalleled geneological archive, the grandiose Salt Lake Temple. But these relics could not compete for the young, secular tourist — at least not since the Winter Olympics invaded in 2002. Veer off Temple Square, and chunks of downtown were sealed off by wooden planks. Nothing to see here.

The morning of March 22 in Salt Lake City was sunny and cool, the temperature hovering around 60 degrees. Off in the distance, the Wasatch Mountains were still covered in snow. The weather was the one portion of the script that no one could control, and even that cooperated magnificently.

And there was a script, to be sure. The invited guests for the official ribbon-cutting ceremony included Monson and LDS Presiding Bishop David Burton, Utah governor Gary Herbert, Salt Lake City mayor Ralph Becker, and executives from Macy’s, Nordstrom and Taubman.

“One, two, three, let’s go shopping!” Taubman exclaimed before cutting the giant ribbon. Fireworks shot into the sky. An a capella group, Eclipse, sang an original cover of “Zoot Suit Riot,” replacing the words “Let’s Go Shopping” during the chorus.

I spoke to retail executives who flew in from around the country just for their Salt Lake City store’s grand opening: Restoration Hardware from Louisiana, Express from Ohio, Cheesecake Factory from California and Steve Madden from Colorado.

But my favorite conversation by far was with a floor clerk at Hugo Boss, a young woman from Salt Lake City who sounded more excited to shop here than work here.

The real Mall of America is open for business. 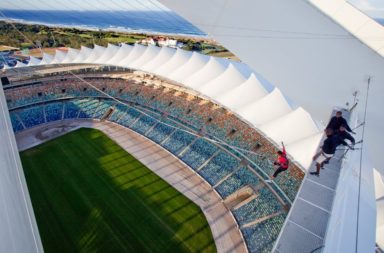