Pittsburgh Steelers: Have football, will travel 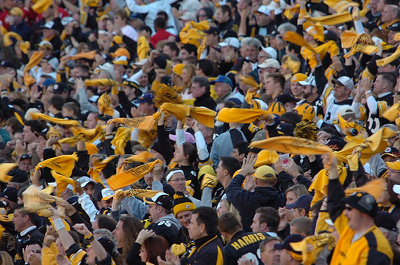 To introduce the Pittsburgh Steelers of the 21st century, it might be time to revive these resounding words: “They appear on television so often that their faces are as familiar to the public as presidents and movie stars.”

That, in fact, was the memorable opening to the Dallas Cowboys’ 1978 highlight film, which famously christened the Cowboys “America’s Team.”

Some 30 years later, coming off their NFL-record sixth Super Bowl title, the Pittsburgh Steelers have gained fame — and bragging rights — from coast to coast. Says former player and online columnist Ross Tucker: “The Steelers have the most dominant fan base in the National Football League and their ability to consistently travel, en masse, and infest other team’s stadiums gives the Steelers a competitive advantage that no other franchise can claim.”

With thousands of fans packing up from Pittsburgh week after week and hitting the road with the team, the fact is underscored that the Steeler Nation truly extends from coast to coast.

So what is it about the franchise that manages to attract this kind of attention?

“The Steelers have a working-class mentality, and people identify with that,” said Jim Parsons, a Pittsburgh-area native, who has spent the last two decades in Southern California. “They are an easy team to follow, they don’t change coaches very often … they have had three in 30 years. When they find good players they keep them around. From the owners to the coaches to the players, there is a consistency there that people recognize.”

The loyalty is not just from the blue-collar crowd in the Three Rivers area, as not all Steeler fans hail from the rust belt.

Rita Wilde, a deejay for classic rock station KLOS-95.5 in Los Angeles is one such fan. “In 1994, I was a season ticket holder for the L.A. Rams … I lived and died with every play they ran, from a Jim Everett pass to an Eric Dickerson run. But then ‘she’ said she was going to move the team to St. Louis,” said Wilde, unable to even speak the name of former Rams owner Georgia Frontiere. “It broke my heart. I followed two of my favorite players to the Steelers, Jerome Bettis and Kevin Greene, and I have been a fan ever since.”

The Steeler Nation is a growing entity that can put on a strong showing just about anywhere in the country.

In 2008, the Steelers traveled to play the Redskins. It was the night before Election Day, and Washington, D.C., was already abuzz with anticipation. The Steelers put on a show with a 23-6 victory against the Redskins, but the Steeler Nation did not disappoint either, showing up in droves and drowning out any home-field advantage the Redskins might have had.

People took notice. Washington Post columnist Michael Wilbon posted on his blog: “Steelers fans are, I think, the best in the NFL. After that, Cowboys fans, Bears fans, Giants fans. All those fans travel. … At least 20,000 fans were in Steelers garb waving terrible towels, Tony [Kornheiser] says it was closer to 30,000. There was no home field advantage. It was a neutral field last night.”

Similar stories crop up across the country, from San Diego to San Francisco on the west coast, to Jacksonville and Carolina on the east.

Florida Times-Union columnist Gene Frenette spoke about the Steelers and their fans coming to Jacksonville in 2006, saying, “They are, undeniably, the NFL’s best road fans, a legion of pigskin loyalists who network like crazy, using whatever resources available to purchase road-game tickets at ridiculous prices to watch their Steelers.

“How can you not bow in homage to Steelers fans? They’re the stalkers of American sports. Few support groups of pro teams do more to fill another city’s hotels, restaurants and seats on game day.

“Wherever the Steelers travel, their fans descend upon NFL stadiums like locusts. You cannot stop them. You can only hope your team plays well enough to muzzle them.”

Jim Parsons, who keeps up with the team with DirecTv’s Sunday ticket and the team’s website, has witnessed  this phenomenon in person.

“I have been to maybe a half-dozen games in recent years,” he said. “Whether it is San Diego or wherever, it is always fun to show up for a game and have a good time with all the Steelers fans.”

On the field, success will bring out the fans, but the Steeler Nation sees something deeper in this franchise.

“All the Super Bowl titles are great, but it goes beyond that,” Parsons said. “People see the same attitude and ethics that they hold dear in the team. They work hard, keep their nose clean, and if someone does step out of line, they get rid of them. They don’t put up with trouble-makers.”

In the past year, the Steelers traded Super Bowl MVP Santonio Holmes following several off-the-field incidents, the last earning him a four-game suspension from the NFL for violating the league’s drug-abuse policy. Fans’ loyalties were put to the test again when franchise quarterback Ben Roethlisberger found himself in the spotlight following allegations of sexual assault.

“I’m kind of surprised that the Steelers didn’t get rid of Ben,” Parsons said. “The Steelers don’t usually put up with that kind stuff.”

And neither does the NFL. Though no charges were filed, Roethlisberger did receive a suspension from the league. When the notion of trading Roethlisberger was broached before the draft in April, Steelers fans were ready to cut their ties with the two-time Super Bowl quarterback. Roethlisberger played in the preseason, and made his regular season debut on Oct. 17, to mixed reactions from fans.

“I am actually going to be at the game when he comes back (Oct. 17 in Miami),” Parsons said recently. “I don’t expect the reaction to be completely negative, but at the same time some in the crowd will let him know they don’t approve.”

Whether it be boos or cheers, one thing is for sure: The Steeler Nation will be heard.