Louisville: Where History and Goodies Collide 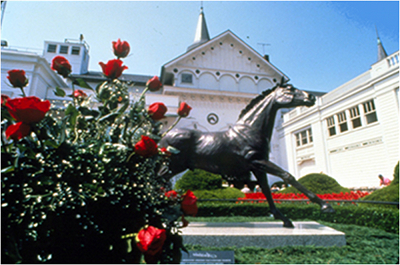 My last-minute trip to Louisville was also my very first — guaranteeing one delightful surprise after another.

As a neophyte, I was urged by a friend to try a Hot Brown (an open-faced turkey sandwich, smothered in cheese, with bacon), to sample a Derby Pie (a cookie stuffed with chocolate chips, walnuts, hot fudge, and whipped cream), and to purchase a Louisville Slugger (which is to baseball bats what Coke is to colas). I hit the ground running in search of all three, only to end up unearthing many more wonders than I could have imagined from Kentucky’s largest city.

Louisville boasts several lively shopping enclaves, starting with the Galt Hotel. There in the Mint Julep store, I picked up some Bourbon candles, chocolate Bourbon balls, and Bourbon bath soak. I then made tracks next door to Koi by Delanor — a jewelry designer who roams the world collecting stones and beads to fashion into unique artifacts. The one-of-a-kind Totem Spirit, a metallic two-tone clay pendant with sterling silver rings on a leather rope, left the store around my neck.

It was then off to The Seelbach, a storied hotel where since 1905

the rich and famous have come to sip Kentucky bourbon and smoke expensive cigars. As an aspiring poker player, I had to play a round with my mother at Al Capone’s table in the Seelbach’s Oakroom. A genuine gangster-in-training with cards in hand, I found myself looking into the oversized mirror against the dark oak-paneled wall to see if anyone was sneaking up behind me — just like Scarface himself did when he was running whiskey along the Eastern shore, anticipating a raid. Of course, Capone’s secret passageways had long ago been sealed off, making a raid unlikely. Still, I enjoyed the thrill.

signature bourbon-inspired van, whisking us away to discover more gems of Louisville. Cruising through downtown, Lisa pointed out some unforgettable little treasures. Metal cages guarding each tree feature an iron sculpture representing a business that stood there in the early 1900s. In the iron-cast district, one must pay attention to the lines of bricks set in the opposite direction from those on the sidewalk, which indicate the cast-iron facades that have remained since the late 1800s. The 30-plus downtown bike racks are city-commissioned, functional works by local artists.

For a vegan lunch, we made our way to The Zen Tea House, designed by owner Coco Tran to bring elements of meditation

and inner calm to a restaurant. Lisa, mom, and I each ordered a flight of tea. Our assortment of light fare included the glass noodle salad with tofu, turmeric, and peanuts, and steamed rice rolls stuffed with mushrooms, tofu, carrots, water chestnuts, and bamboo shoots. Guests sit on squishy sofas or opt for floor pillows, and many simply drop in to absorb the quiet, serene setting.

We made quick trip out to Churchill Downs for a walking tour and to pick up a horseshoe from the 1996 Kentucky Derby. Derby horseshoes are a collector’s must in Louisville, and ours came complete with a little Derby dirt — just the way you want it.

Lisa showed us The Palace Theater, where Elvis debuted “Love Me Tender,”

then dropped us off at the Slugger Museum to learn more about the official bat of Major League Baseball. After shipping some Sluggers off to family and friends, we headed across the street to the Frazier International History Museum. This little-known museum houses a permanent collection of arms and armory artifacts created between the 16th and 20th centuries. I always wondered why my grandfather would say “speak softly and carry a big stick” — it all became clear at the Frazier, where President Theodore Roosevelt’s “Big Stick” is on display. There’s also Daniel Boone’s family Bible and a bow attributed to American Indian Chief Geronimo.

Upon reaching our hotel, The Brown, we were greeted by the hotel’s founder, J. Graham Brown. The life-sized bronze statue, sporting a 1940s felt hat and business suit, stands outside the hotel lobby on Fourth Street. His dog, Woozem, stands next to him as if both are frozen in time.

Inside The Brown, I was overwhelmed by its ornate detail, English Renaissance architecture, and hand-painted plaster relief ceilings. The lavish construction has secured this hotel as a Louisville landmark, and the service has a long-standing tradition of excellence. Everyone here is treated like royalty — staff members spring to accommodate your every need. We settled in to J. Graham’s Café for the famous Hot Brown, invented here in 1926. During its Prohibition-era heyday, the hotel drew more than 1,000 guests each evening for its dinner dance. In the wee hours of the morning, the crowd would gather in the restaurant for breakfast. Bored with the traditional ham and eggs, Chef Schmidt created the Hot Brown.

Ready for a nap but needing to walk, we headed two blocks from Lynn’s to Bardstown Road, an eclectic mix of little shops. The journey began at Kizito Cookies, a store and bakery that’s become a local favorite. The secret to Kizito’s success is the owner, Elizabeth. She learned the cookie business growing up in Africa from her father, who gave her the recipes and taught her how to run a business. Locals line up to snatch her cookies, grabbing eight and 10 at a time. A small storefront space is held for an array of unique little gifts Elizabeth imports from Kenya, Uganda, Tanzania, and Rwanda, including earrings made from banana leaf and bracelets carved from cow horns.

We filled two oversized bags with a combination of cookies and jewelry before making our way to another legendary sweet stop, Schimpff’s Confectionery. A family-owned candy shop since 1891, no trip to Louisville would be complete without stopping here.

We happened to drop in while they were making Anise drops, the sweet green candies modeled in the same fashion as their legendary red hots. Proving that older is often better, Schimpff’s uses a hand-operated, 19th-century drop roll machine and prepares its candy on a 118-year-old table. Antique equipment for hard candy is hard to come by these days, and this store claims ownership of the only candy museum in the United States with old-fashioned candy jars, cases, and turn-of-the-century equipment.

Schimpff’s also has a lunch area serving soup, sandwiches, and fries. We nestled into a booth for an old-fashioned soda — mine a cherry Coke, my mother’s a vanilla diet Coke. The syrup is so fresh and sweet, you’d never guess it was “lite.”

Weighed down with candy, we dropped off our goods at the hotel before moseying on down to the Thomas Edison House. A 19-year-old Edison came to Louisville to work for Western Union in 1866 and rented a room in a cottage, which is now a museum filled with his inventions. Christmas lights from the early 1900s are hung with care, along with a large collection of light bulbs in a variety of shapes and colors. During the tour, the guide plays “By the Light of the Silvery Moon” on the phonograph (which Edison invented in 1877, two years before the light bulb). The album, dated 1909, crackles and pops with the tinny voice of Ada Jones, one of the first singers to sign with the Edison label.

For dinner, our hotel concierge recommended Jack Fry’s, a local establishment founded in 1933 by a local bookmaker and bootlegger who loved boxing and ponies. The worn and unassuming exterior hides a small, dark space that’s alive with the boisterous energy of a 1920s speakeasy. The current din is the sound of the longtime clientele fussing over the menu. Soon after a suggestion of the shrimp and grits, I fell in love with the dish’s creamy pool of grits topped with seared country ham, a red-eye gravy, and sautéed shrimp. The pan-seared sea bass — seared in sweet corn, scallions, and basil in a lobster, ginger, and red pepper broth — had me swooning. But the dessert took the cake. Specifically, the Chocolate Soufflé Cake, which is served with a warm hazelnut ganache center and a mini-chocolate milkshake on the side.

So what about that Derby Pie? I had to leave it out. I wanted a reason to come back.