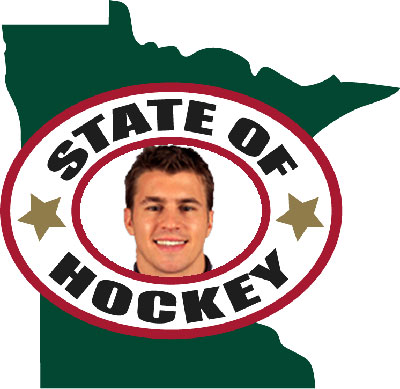 Minnesota has always loved ice hockey and probably always will. The Wild sell out almost every game and season tickets are gone in the blink of an eye at the start of every season.

This season, they might even go faster than that with native Minnesotan Zach Parise suiting up for the Wild.

The Wild have struggled mightily since winning the Northwest Division for the first time in 2007, missing the playoffs every year after that despite having a large amount of talent (a far cry from fellow expansion team Columbus), but by adding Parise as well as defenseman Ryan Suter, Minnesota has gone from being the cellar-dweller to a potential division champ.

No matter what the sport, Minnesota loves its hometown heroes – Joe Mauer, Paul Molitor, Dave Winfield, Kevin McHale, Herb Brooks, Neal Broten, etc. It’s been quite a while since the state had a hockey player of such caliber as Parise to cheer for (Broten was probably the last) and he will easily have the most popular jersey in the crowd on opening night.

Many in the press have said how polite and accommodating Parise has been over the years. I’m sure it wasn’t fun being cornered at the airport and being asked where you were going to sign, but he still answered the question and shrugged off the inconvenience. This will only endear him to Wild fans even more; Minnesotans value politeness almost as much as winning percentages.

During his years in New Jersey, Parise put together an impressive career with 194 goals and 410 points. In addition to some great stats, he also was on the US Olympic team in 2010 and scored the game-tying goal right before the end of regulation in the gold-medal game. He also won a gold medal at the World Junior Championships in 2004.

However, Parise really started to shine during his college days at North Dakota. Already a talented recruit coming out the hockey powerhouse Shattuck St. Mary’s in Faribault, Minn., Parise became a Hobey Baker Award finalist during his freshman year with the Fighting Sioux and helped lead North Dakota back to the NCAA tournament in 2003. After getting drafted by the Devils that off-season, Parise had an equally impressive sophomore season, leading the Sioux to the conference championship and becoming one of the three finalists for the Hobey, finishing second.

Hobey is college hockey’s equivalent to the Heisman. Just like the Heisman Trophy, Hobey Baker Award winners usually have one good season and amount to nothing once they enter the professional ranks. The 2003 winner, Peter Sejna, and 2004 winner Junior Lessard are currently playing overseas after underwhelming careers in the North American minor leagues.

During his time with the Sioux, Parise was seen as the “Golden Boy” by the student body. He and fellow NHLer Matt Greene would have their own table in the dining center with fellow students rarely coming up to talk to them.

I always found that funny, considering both are some of the nicest people I’ve met. Parise and Greene were roommates in Walsh Hall and lived three doors down from me during my freshman year. Like most hockey fans, I wanted to talk to them but wasn’t exactly sure how to do it. Compared to those two, I was a mere peasant in their kingdom.

I first met Parise when the Sioux were on an off-weekend. I had just ordered a pizza, which I planned on enjoying while watching Hockey Night in Canada alone (I was a real party animal). I was told that the pizza was on its way and I made my way down the stairs to the loop located at the back of the dorm. As I opened the door, Parise was standing there. Not knowing what to say, I did the typical college greeting of “Sup, man.” He turned around, nodded at me and replied with a “Sup.” I really didn’t want to bother him, but when would be the next time I’d actually have a private conversation with a player like Zach Parise?

I cautiously broached the topic of hockey by saying “That was a nice game you had last week.” I was expecting a blunt response of “Thanks” or maybe not even that. Instead, he surprised me by thanking me and going into detail about the previous weekend’s series. After that, we discussed growing up in Minnesota and he asked me if I played hockey. I told him that street hockey was the highest level of skill I achieved and he got a good laugh out of that. The time really flew by and 10 minutes later, both my pizza and his teammates arrived at the same time. I wished him good luck next week. He said it was nice to meet me. The rest of his time in the dorm, Parise greeted me with a nod.

Looking back on it, I was impressed by how organized and mature he was considering he was only 18. He seemed like he had clear goals in mind and he wasn’t about to be swayed from them. If you’re wondering if he was a troublemaker or a partier, I don’t have much to tell you. Walsh Hall is the big party dorm and it’s where all the hockey players stay their freshman year and I didn’t hear anything about Parise. (Other players were a different story, but that’s another column).

During his two years at UND, Parise provided a glimpse of the player he would become and he showed what kind of a person he was. Minnesota is lucky to get him back on his home ice and I’m sure he’s glad to be back too. If the Wild can give him a couple more supporting players, Parise could give Minnesota what it’s wanted for decades: A Stanley Cup.