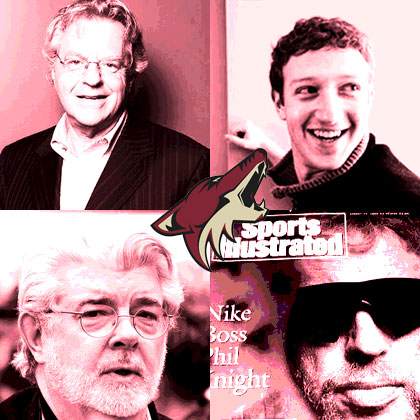 Hockey needs a bastard of a personality – a Jerry Jones, a Mark Cuban, a George Steinbrenner, an owner whose mere presence demands respect among his peers.

Because, let’s face it: In the sports world, the puck is the little sister of its bigger and badder brothers, the basketball (NBA), the baseball (MLB), the football (NFL). If hockey is gonna grow, a seed needs to be planted in the form of an obnoxious owner, someone who will walk into an NHL board meeting and throw a coffee mug at Gary Bettman’s dome whenever asinine words such as “shootouts” or “trapezoids” are mentioned as rule changes.

We need an owner who is not afraid to demand integrity, to lure his fellow owners to ship Bettman to Guam, or to find a new commissioner who actually knows the difference between Patrick Kane and candy cane.

Greg Jamison, the former San Jose Sharks owner who is on the verge of purchasing the Phoenix Coyotes, is not such an owner.

That’s means we’re stuck in the same predicament: Hopelessness. Our teary eyes will continue to look back at the early 1990s, the pre-Bettman era, when the game was at its mouth-watering peak: 150-point scorers, smaller goalie pads, an instigator rule that didn’t exist, open-ice hits void of suspensions, and zero Brendan Shanahan videos.

Such greatness will never return – unless a personality arises and helps change the landscape of the league.

We need one of these guys:

The rundown: He’s the mastermind behind the tabloid classic created in 1991. It features a parental advisory to open the show, followed by arguments, curses, fisticuffs and flying chairs, all before a wild, chanting audience (“Jer-ry! Jer-ry!”).

Springer would custom-fit his roster to meet the needs of the best brawl in NHL history: The 1984 Canadiens-Nordiques fiasco that spilled into intermission and continued during third-period warm-ups.

Remember the 1980s “Rock’em, Sock’em” videos? That would be a game-by-game occurrence! There would be fights galore – pre-game, in-game, post-game.

Popularity? Heck, Springer’s franchise would generate its own specialty TV show (kind of like “Leafs TV”).

Hey, can you imagine Milan Lucic’s girlfriend and Cory Schneider’s “trucker broad” duking it out on the show?

How about a teary-eyed Sidney Crosby telling a national audience that “calling me Cindy hurts my feelings”?

We could have Sean Avery and Toronto defenseman Dion Phaneuf argue about Elisha Cuthbert, then brawl up on stage.

We can have old teammates Scott Hartnell and Jeff Carter discuss an alleged locker room tiff in Philadelphia in 2011.

The league’s popularity would soar.

The rundown: Talk about a perfect fit: The ‘Yotes carry personalities from characters in The Social Network.

Start with goalie Mike Smith, whose irrational “Raffi Torres comparison” after Game 5 of the Western Conference Finals had “Christy Lee” written all over it.

Here’s to thinking Smith would play poorly, then get harassed and ripped publicly by Zuckerberg, who would come home to find his scarf lit on fire by Smith, à la Christy Lee.

How about Paul Bissonnette? He’s a master on Twitter with 300,000 followers. Oh, we can see it now: Zuckerberg scorns Bissonnette for using a rival site, Bissonnette bails the locker room, comes back, then finds his role diminished with the team, à la Eduardo Saverin.

And don’t forget about Shane Doan, whose season-ending tirade fit all the characteristics of the Winklevoss twins – passion, wit and whining.

Remember: The Winklevosses whined to the Harvard president and stomped away like little girls when they didn’t get their way. That was Doan after the L.A. Kings ended his season.

Famous for: Co-founder and chairman of Nike

The rundown: The University of Oregon was once the red-headed stepchild of college football. Then the program made its first Rose Bowl appearance in 37 years and an alum named Phil Knight pumped millions into the school’s athletic department (and pimped the Swoosh logo all over campus).

Duckland has never been better.

Heck, Knight is so rich, so powerful, so genius, his marketing abilities helped a bad quarterback (Joey Harrington) become a Heisman Trophy candidate. Just imagine what he could do for an NHL team who reached the conference finals in May.

We’re talking about Knight, a guy who is so intense, he allegedly bullied an Oregon track and field coach out of a job. Yes, a track coach. Can you imagine if his John Tortorella-like personality is plastered across NHL media outlets? Ratings would skyrocket. Maybe a new wave of commercials would roll around, too.

And how’s this for competitiveness: Knight has been known to wear a headset in Oregon’s Autzen Stadium. If he got his hands on a hockey franchise, he would probably freeze himself in the ice like that Verizon commercial. Or, maybe he would buy out Pierre McGuire’s contract and watch every game between the benches. That’s our hope, anyway.

Hey, if Knight’s program-boosting efforts helps persuade Floridians to play football in the cloudy Pacific Northwest, then he can surely make ice hockey stay in the desert.

Famous for: Creator/director of the “Star Wars” movie franchise

The rundown: Imagine if the Coyotes dressed like C-3PO and masked their identities to opponents.

Imagine a laser light show for the first-ever home opener, when Luke Skywalker and Darth Vader make a celebrity appearance and “drop the gloves” at the command of Lucas.

Imagine a laser light show for the playoffs, when the entire arena lifts off into space – except it will be fake, just like that Queen-Elizabeth-and-James-Bond stunt during the London Olympics.

Don’t put anything past Lucas. Remember the FoxTrax? He can multiply that by 10,000. Imagine a glow puck severing a hated opponent in dramatic 3-D effect to please the fans.

Yes, all of this sounds crazy. But if you told us say, around 1990, that a bird and a computer screen would someday mesh into the most newsworthy source of information (Twitter), we would’ve laughed hysterically.

And you have to figure the Coyotes’ roster received a healthy dose of “universe” talk from Ilya Bryzgalov during his stint in Phoenix (2007-11). Thus, the transition into an inter-galactic theme under owner Lucas will be smooth.

What’s funny is this: Chewbacca used to be the Seattle Supersonics’ mascot. The Phoenix Coyotes are talking about moving to Seattle.

Is Chewbacca just waiting in the wings for Lucas to buy the Coyotes and move them to Seattle?