Here’s a one-of-a-kind piece of hockey memorabilia that doesn’t hit the auction block every day: Ken Morrow’s game-worn jersey from the “Miracle on Ice” game at the 1980 Olympics. 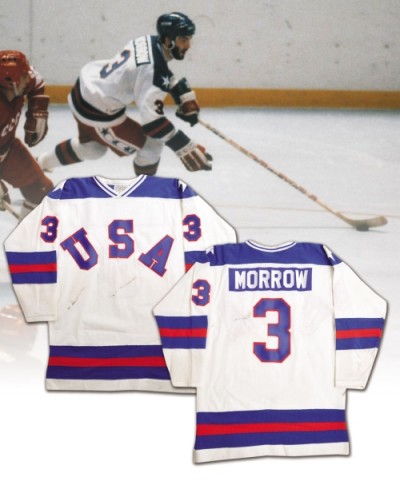 From the Classic Auctions press release:

Classic Auctions is honored to offer the Ken Morrow Collection, which also features the U.S. Olympic team track suit Ken wore at the gold medal ceremony in Lake Placid as well as game-used “Miracle on Ice” equipment, including the rugged defenseman’s skates. The auction will close exceptionally on Wednesday, February 22, 2012, in honor of the 32nd anniversary of this landmark event in international hockey history.

J.P. Hoornstrahttp://www.jphoornstra.com
I write about the Los Angeles Dodgers for the Southern California News Group and destination travel for various media outlets, including the New York Daily News.
Previous articleAll-Star Games are no cure for puckaholism.
Next articleReleased from the mental institute, and the Blackhawks are still losing.

Copyright @tagDiv | Made with Newspaper Theme