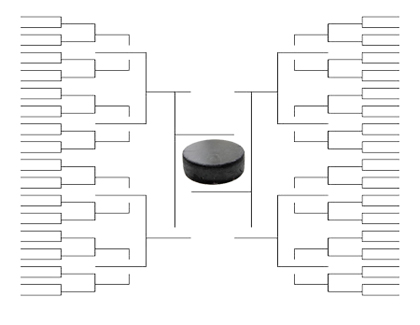 The world of college hockey will be different this season.

One conference, the CCHA, is gone. Its teams either joined the WCHA, Hockey East or one of two new conferences — the Big Ten and National Collegiate Hockey Conference (NCHC). Also, just two years after being in danger of being dropped as a program, Alabama-Huntsville has finally found a conference.

The new conferences aren’t nearly as interesting as the new storylines.

Will the ECAC be considered a top tier conference? (Maybe, if other teams are able to equal Yale’s success).

Will the WCHA still be competitive? (Now that the powerhouses are gone, probably not).

Will the Big Ten teams battle for the crown till the end of the season? (No).

With those questions answered, let’s look at each conference individually, starting with the ornery one that caused all the realignment problems in the first place: The Big Ten.

*1. Wisconsin: The Badgers appear to be back on top this season with leading goal-scorer Michael Mesch (36 points, 23 goals) leading the way. Tyler Barnes (30 points) and Mark Zengerle (32 points) can also quickly put the puck in the net. The blue line is anchored by Jake McCabe Jr. (21 points) and Frankie Simonelli, who can both score and deliver strong hits. Goaltender Joel Rumpel (1.96 GAA) also continues to improve each season and should be a solid netminder after a successful run to the Final Five and the NCAA tourney. Wisconsin should earn a top seed in the NCAA tourney and has the talent to make it to Philadelphia.

*2. Minnesota: The Golden Gophers lost a lot of key players such as Nick Bjugstad, Zach Budish and Erik Haula, but Minnesota still has the capability to be a force this season. One of the best forwards in the country, Kyle Rau (40 points), has returned after averaging a point per game last season and Nate Condon (31 points) will also provide some firepower. The Gophers also have a strong defensive corps led by Mike Reilly and Brady Skjei. Goalie Adam Wilcox had a strong first season, picking up 25 wins and posting a 1.88 GAA. Minnesota will probably get a number-two seed and if they can get hot at the right time, could make the Frozen Four.

*3. Michigan: The Wolverines’ long streak of making the NCAA Tournament ended last season and the team underachieved. That shouldn’t happen again this year. Michigan’s strength lies with its defense, led by Mac Bennett and Brennan Serville. The Wolverines lack the consistent scoring of the Badgers and Gophers, but Phil Di Giuseppe (28 points), Alex Guptill (36 points) and Cristoval Nieves (29 points) should have solid seasons. I predict a number-three seed for Michigan and a potential Regional Final.

From the conference with the largest schools, we move to the one with the most talent from top to bottom:

*1. Miami: The Redhawks are young but can score in bunches. Riley Barber is the biggest threat (39 points), but Austin Czarnik (a second team All-American with four short-handed goals and 40 points) can also light the lamp. Miami also has offensive defenseman Matt Caito (21 points) anchoring the blue line. Finally, Ryan McKay is one of the best goalies in the country, earning a 1.39 GAA last season. The Redhawks will pick up a number-one seed and are primed for a Frozen Four run.

*2. North Dakota: If there’s a team that reloads every season, it’s this one. Defenseman Dillon Simpson is the one on everyone’s radar (24 points in 2012-13), but Nick Mattson and Jordan Schmaltz are also strong blueliners. UND lost key scorers Corbin Knight, Danny Kristo and Carter Rowney, but dynamic sophomore Rocco Grimaldi (36 points) can definitely pick up the slack as long as he is healthy. Mark MacMillan (25 points) is also a capable scorer. Finally, UND is has two goalies that can step up big when needed: Zane Gothberg and Clarke Saunders. North Dakota will probably earn a number-two seed and a Regional Final, but don’t be surprised if they end up in Philadelphia.

*3. St. Cloud State: The Huskies made their first Frozen Four last season and they have a decent chance to get there again. SCSU lost Hobey Baker winner Drew LeBlanc, but Nic Dowd (39 points) is a great replacement. Joey Benik is also a great weapon for the Huskies. Ryan Farragher is also one of the best goalies in the conference (2.27 GAA) and should backstop SCSU to another tourney bid.

*4. Denver: The Pioneers made the most shocking move of the off-season in firing head coach George Gwozdecky, a man who led them to back-to-back titles in 2004 and 2005. They found a good replacement in Jim Montgomery, a former star player at Maine who led the Black Bears to their first national title in 1993. Denver isn’t as star-laden as it used to be, but it still has Joey LaLeggia (29 points last season) and David Makowski (27 points). Goaltender Sam Brittain is one of the best and should get the Pioneers in the tourney as one of the last at-large teams.

Now, to a conference with a lot of history and talent, but not as much consistency as the first two.

*1. UMass-Lowell: The River Hawks made their first Frozen Four last season and are primed for another big run. They’re so primed, in fact, they start the season as the number-one team in the country. Lowell has sophomore phenom Connor Hellyebucyk (1.37 GAA and .952 save percentage) in goal with a very capable backup, Doug Carr. Scott Wilson (38 points), Joseph Pendenza (38 points) and Derek Arnold (30 points) make up one of the best lines in the land and pro prospect Christian Folin leads the defense. The River Hawks will most likely make it to Philadelphia and are a clear national title contender.

*2. Boston College: Surprise, surprise: The Eagles are stacked once again. The big question is, can they keep up their even-numbered-year national title streak alive? (BC won national titles in 2008, 2010 and 2012 and came very close to winning one in 2006.) Head coach Jerry York has Hobey Baker candidate Johnny Gaudreau (51 points in 2013-14) along with seniors Kevin Hayes (25 points) and Bill Arnold (35 points) up front, and a deep defensive unit led by Michael Matheson (25 points) as well as much-hyped freshman Thatcher Demko in net. BC isn’t as deep as Lowell but always has the ability to make a run to Philly.

*3. Notre Dame: After taking forever to make up its mind on what conference to join, the Fighting Irish picked Hockey East over the NCHC, which settled for St. Cloud State as its final member. T.J. Tynan is the biggest scoring threat (28 points last season) along with fellow seniors Bryan Rust (34 points) and Jeff Costello (30 points). Bruising defenders Stephen Johns and Kevin Lind, both recent NHL draft picks, guard the blue line. Steven Summerhays turned some heads last season between the pipes (2.01 GAA). The Irish can be unpredictable and will either overachieve or underachieve — there is no in-between with this team. I’m thinking it will be the former this season.

The next conference used to be the most powerful in the NCAA. Now that the legendary programs have left, it’s a shell of its former self.

*1. Minnesota State: Rejoice Mavericks fans! Your beloved team will finally win a conference title! (Granted, it will occur after North Dakota, Minnesota, Wisconsin, Denver, et al. have left the conference, but still, it’s something). MSU made only its second NCAA tourney last year and have the weapons to make it back. The Mavs lost their leading scorer, Eriah Hayes, but Preseason Player of the Year Matt Leitner (47 points in 2013-14) will pick up the slack. Rookie of the Year candidate Zach Stepan will be fun to watch. Goalie Stephon Williams will also steal some wins for MSU. Mavericks fans shouldn’t book their flights to Philly yet, but this will be a banner year for their squad.

*2. Michigan Tech: Just like MSU, Tech fans will finally see their teams achieve a high level of success again. Forward Alex Petan made the conference Rookie Team last year with 34 points and will be the Huskies’ biggest threat along with David Johnstone (29 points) and Blake Pietila and Tanner Kero (24 points apiece). Netminder Pheonix Copley didn’t have great stats last year, but has potential to shine and is the best player named Pheonix in the sport. The faithful in Houghton will finally have a solid team to cheer for, one that won’t just make it to the Final Five but also to the big tournament.

Last year, the ECAC won its first national title since 1989. It’s not quite at the level of play as the previous four, but it has a lot of potential.

*1. Yale: The defending national champion Bulldogs won’t surprise people this season and will return to the NCAA tourney thanks to forwards Kenny Agostino (41 points last season), Jesse Root (23 points) and Tommy Fallen (23 points). Yale lost goalie Jeff Malcolm, but talented freshman Alex Lyon should be a fine replacement. The Bulldogs are capable of another Frozen Four run, but I have a feeling they won’t make it to Philly.

*2. Rensselaer Polytechnic Institute (RPI): The Engineers are Yale’s biggest threat and are led by juniors Matt Neal (30 points), Jacob Laliberte (28 points) and Ryan Haggerty (26 points). Curtis Leonard is a good blueliner and goalie Jason Kasdorf has sparkling stats (1.62 GAA and .935 save percentage). I predict a tourney bid for RPI, but I don’t see them getting past the first round.

Finally, there’s the smallest conference, but the one prone to huge upsets in the NCAA tournament.

*1. Niagara: Despite losing a Hobey Baker-caliber goalie in Carsen Chubak and two of its three leading scorers, the Purple Eagles are still a talented squad with scorer Ryan Murphy (36 points), fourth-leading scorer Ryan Rashid and assist leader Kevin Ryan. Niagara will have some untested goaltenders, but it has enough depth to make it back to the NCAA tourney.

*2. Mercyhurst: The Lakers are the team who has the best chance to beat out Niagara. They return scoring leader Matthew Zay and leading goal-scorers Ryan Misiak and Chris Bodo (18 goals apiece). Goaltender Jordan Tibbett was solid in net last year and Mercyhurst has a deep defensive corps. I think Niagara beats them for the title, but the Lakers will be like Denver and do just enough to make the tourney.