The Finals matchup is set. Who will hoist the Stanley Cup?

The moment hockey fans have been waiting for all season has finally arrived: Two talented teams — lower seeds, at that — will face off for the Stanley Cup. And both still haven’t quite earned the respect they deserve.

This is quite an impressive feat considering that the Kings had to put together a nice run near the end of the regular season just to make it into the playoffs.

However, the Kings are still treated as the forgotten team in Los Angeles. Granted, it is the Lakers’ town and probably will be for years — celebrities attend their games in droves — but even the Clippers have gotten more press in the playoffs than the Kings have and they were swept aside in the second round of the NBA playoffs.

It’s actually gotten so bad that the television stations have been disrespecting their hometown hockey team. One station (KNBC) placed the NBA’s Sacramento Kings logo on the screen during L.A.’s game recaps (this is really pathetic considering that NBA’s Kings logo has the word SACRAMENTO in bold lettering at the top). 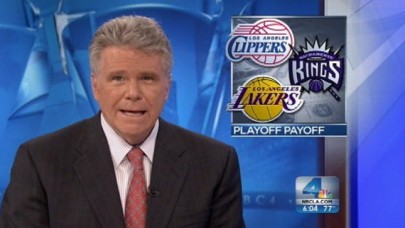 Another station (KCBS) devoted part of a segment to show footage of what they thought was the Kings mascot playing with some kids. It was actually Sacramento’s mascot Slamson and the station should have been able to figure that out, considering he was wearing a basketball uniform. That moment actually outraged the actual L.A. Kings mascot, Bailey, who then sent out a fiery tweet to KCBS.

Finally, L.A.’s Fox affiliate took this idiocy to a whole new level when its anchor used the phrase “The Kings have the ball” during a recap. Now being a sports anchor isn’t easy by any means and hockey can be hard to talk about if you aren’t used to it. However, combine that moment with the gaffes rival stations have made recently, and it appears as if the L.A. television media has no clue about hockey.

So here’s a quick lesson to all members of the media. There is no ball in hockey. I will give the L.A. anchor credit though as she realized her mistake soon after, recovered quickly and was able to put together a decent recap.

The Kings have at least remained good sports about the lack of respect they are getting. Their social media team (who have also sent out some pretty clever tweets throughout the playoffs) even sent out a handy easy-to-read infographic so that there won’t be any further confusion between them and the basketball franchise in the state capital:

While the Eastern Conference Champion Devils haven’t been dissed as badly as the Kings, New Jersey has to live in the shadow of that metropolis to the north and that blue-shirted team that plays in the most famous arena in the world.

The Devils also have to live with the memories of 1994. That season, they were swept by the Rangers in six games during the regular season. Then after taking a three games to two lead in the Eastern Conference Finals heading into Game 6, New Jersey would go on to lose at home and then fall in a heartbreaker in double overtime in Game 7. The Rangers went on to win their first Stanley Cup since 1940.

Since then, the Devils have won three Stanley Cups to the Rangers zero, but they still had yet to beat the Broadway Blueshirts in the playoffs. That changed just a few days ago when New Jersey rewrote history and beat the Rangers in six games to make it back to the Stanley Cup Finals for the first time since 2003.

Now that both teams have gotten their local media outlets to pay attention and get local fans to forget about the more famous hockey team in town, it’s time to compare them and discuss who will be hoisting the Stanley Cup.

Probably the most interesting storyline involves the two goaltenders. On one side, you have one of the best goaltenders of all time in Martin Brodeur. Brodeur holds the NHL records for most regular-season wins, most single-season wins and most shutouts among others, as well as three Stanley Cup titles. He also has a reputation for outdueling hotter goaltenders and stopping more talented teams in the playoffs.

On the other side, there’s one of the best young goaltenders in the league in Jonathan Quick. Quick is a Vezina Trophy finalist this year and if the Kings go on to win the Cup, he is widely considered to be the frontrunner for the Conn Smythe Trophy.
It really comes down to these two men in Finals. If Quick can outduel Brodeur, it will be a great accomplishment and if Brodeur can outduel Quick, it will further cement his legacy.

Another great storyline is which team’s stars will come through in the clutch. The Kings bring Anze Kopitar, Dustin Brown, Mike Richards and Jeff Carter, all capable of taking over a game. The Devils counter with Ilya Kovalchuk, Zach Parise, Patrik Elias, Stephen Gionta and Travis Zajac. All have had great regular seasons and have stepped it up a notch to get their team to the Final.

In addition to star power, both teams will need unsung heroes to come through for them — as the Devils’ Adam Henrique did when he scored the game-winning goal to send them to the Finals. New Jersey has a more balanced attack, while Los Angeles tends to rely on its top lines.

It’s prediction time, where I’ve had some decent success so far. I did well in the first round, stumbled in the second round and then recovered in the Conference Finals. After looking over the stat lines and rewatching some game footage, this is a difficult series to predict. New Jersey has put forth a surprising playoff run and has a history of stopping hot teams in the Finals by exposing their flaws. However after what I’ve seen so far, it’s hard not to go with the Kings. They lit up three teams that had far better regular seasons, and haven’t shown any signs of slowing down. If they can pick up their power play and slow down Kovalchuk and Parise, the Kings should be crowned champs at the end.

Hopefully, the local TV stations will notice this time.

J.P. Hoornstrahttp://www.jphoornstra.com
I write about the Los Angeles Dodgers for the Southern California News Group and destination travel for various media outlets, including the New York Daily News.
Previous articleCover campaign down to Final Four.
Next articleStanley Cup Finals: Why the Kings will win in six games.

Copyright @tagDiv | Made with Newspaper Theme