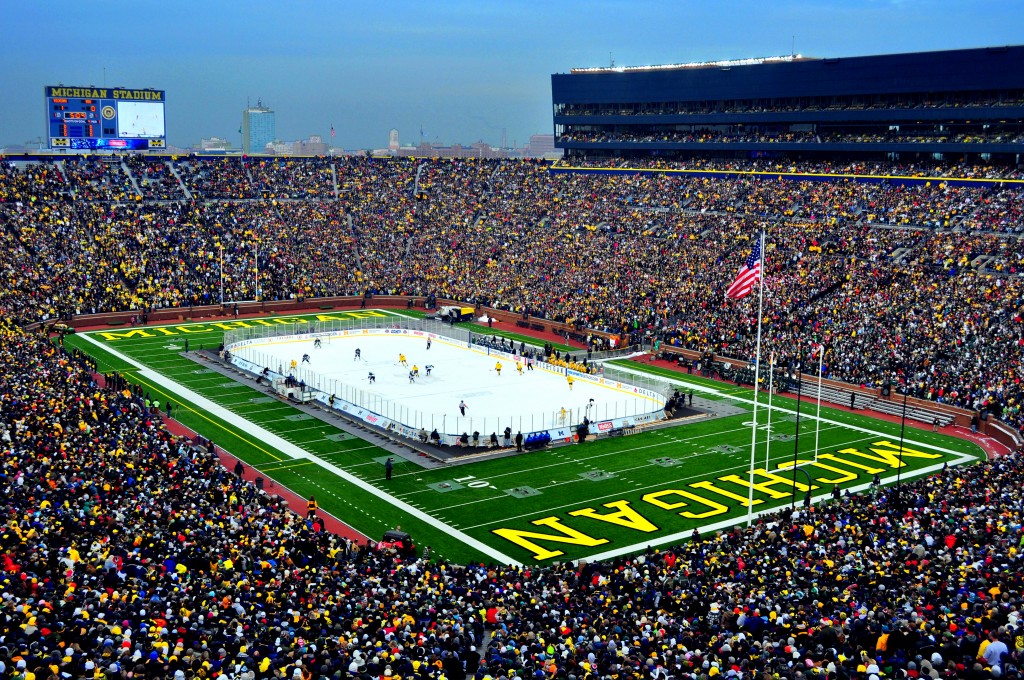 As I type this column, I feel a great sadness. Snow is lightly falling outside my apartment window in the background and instead of watching the Winter Classic on NBC, I’m watching a bunch of unimportant bowl games on ESPN. Normally I enjoy college football, but until the BCS National Championship occurs next Monday, none of the games matter to me.

This weekend was supposed to be something great for all hockey fans – especially those in Detroit. The city was planning on pulling out all the stops with an American Hockey League game (Toronto Marlies vs. Grand Rapids Griffins), an Ontario Hockey League doubleheader (Saginaw vs. Windsor, London vs. Plymouth) as well as college hockey’s Great Lakes Invitational tournament (Michigan, Michigan State, Michigan Tech and Western Michigan) outdoors at Comerica Park, home of the Detroit Tigers.

With the lockout lasting longer than it should have, the AHL and OHL games moved indoors. The GLI moved back to its normal location, Joe Louis Arena. This killed me and my hockey-loving friends because it would have been great to see how Comerica handled hockey and if fans in Detroit would pack the house like their counterparts in Boston, Philadelphia and Chicago.

The Marlies and the Griffins played back-to-back games in Grand Rapids with each squad getting a win, while the GLI featured a truly great moment – the long-struggling Michigan Tech Huskies won their first tourney title since 1980, with goaltender Phoenix Copley earning back-to-back shutouts over Michigan and Western Michigan.

While the other games were still able to be played albeit indoors, Detroit’s main event today between the Red Wings and the Maple Leafs at the Big House was not played at all, disappointing sports fans everywhere. Even ESPN’s Facebook status said “Today just doesn’t feel right without hockey.” For the self-proclaimed “Worldwide Leader of Sports” to miss the Winter Classic really says how stupid this lockout is.

If there’s one thing I’m known for as a writer, it’s asking what-if questions about sporting events. I’ve offered predictions about who would have won each Super Bowl between the AFC and NFC’s runner-ups. Same thing in hockey: Who would have won last year’s Stanley Cup Finals if it had been played between the Rangers and the Coyotes (Rangers in five games if you’re wondering).

So with the Winter Classic not being played at all this year, I thought this would give me the perfect chance to predict how the game would have finished. Without further ado …

With mostly cloudy skies hanging over the largest college football stadium in the country, 115,000 hockey fans filed through the turnstiles into Michigan Stadium in Ann Arbor. The previous hockey attendance record occurred just three years earlier at the Big Chill, but today’s fans shattered it. By the time the Red Wings and Maple Leafs made their way to the rink located at the 50-yard line, snow flurries started to fall from the clouds and a slight wind picked up, sending shivers down the spines of the red- and blue-clad fans.

With the Red Wings wearing the red striped jerseys of the 1926-27 Detroit Cougars and the Maple Leafs wearing the white jerseys with the blue leaf in front from the 1927-28 season, the puck dropped in the first period. The first paces were slow, with both teams acclimating to the elements and gain their footing on the ice. The Leafs got on the board midway through the period when James Van Riemsdyk slid a rebound past Wings goalie Jimmy Howard. The Wings would tie the score with less than 30 seconds left in the frame when Johan Franzen beats James Reimer with a snap shot just under the blocker.

As the second period got underway the wind picked up, forcing both coaches to make more line changes to keep players warm. Just four minutes in, things started to heat up. Small scrums erupted all over the ice – the largest being an all-out brawl between the Wings’ Todd Bertuzzi and Leafs captain Dion Phaneuf. The bout itself was a draw, although Phaneuf got in one last jab to Bertuzzi’s jaw before the refs escorted them to the penalty boxes. One minute later, an errant Red Wings pass went wide of its intended target. Toronto winger Matt Frattin scooped it up, started a breakaway, then tried to get Howard to bite on a fake but held his position. Frattin used his puck-handling skills1 to deke Howard slightly out of position and the forward tucked the puck just between the goalie’s skate and the left post.

Toronto would increase its lead to 3-1 with about seven minutes left in the period when Phaneuf fires a blistering slap shot through a screen past Howard’s glove. Even though the Leafs had a two-goal lead, Phil Kessel took a dumb penalty in slashing Pavel Datsyuk with three minutes left in the frame. Reimer is able to withstand a series of shots on the power play but eventually gives up a juicy rebound right to Henrik Zetterberg, who buries it. Toronto leads 3-2 heading into the third period.

It doesn’t take the Wings long to send the crowd into a frenzy. Thirty seconds into the frame, Franzen scores his second goal of the game off a one-timer from Zetterberg. Detroit has a great chance to take its first lead, but Reimer stops Bertuzzi cold near the net.

Both teams continue to play aggressively for the rest of the period, but both goalies stand on their heads. Howard makes the save of the game with six minutes left, flashing the glove to rob Leafs defenseman Mike Komisarek of a wide-open net.

The game then heads to overtime, where it’s clear that both squads are exhausted. The effort going after the puck is slow. There are fewer hits. With a little more than a minute left in the extra frame, Phaneuf takes it upon himself to make a play and hammers Jordin Tootoo along the boards behind Howard. The Detroit winger coughs up the biscuit, which trickles over to Kessel, who makes up for his earlier penalty and snipes a shot past a sprawling Howard, giving the Leafs a 4-3 victory.

Back in November, the NHL said that the 2014 Winter Classic would be played in Ann Arbor so I have another year to wait to see if my prediction holds true. Until then, I’ll just pretend that I was right.

1. The same puck-handling skills that should have won him the Hobey Baker while he played for North Dakota.