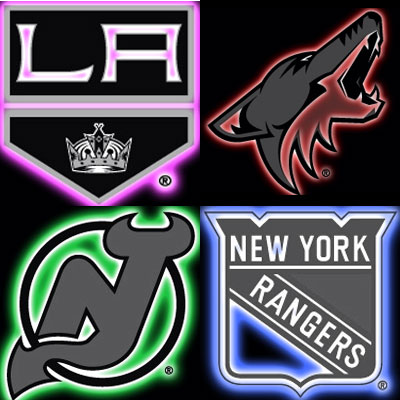 Looking at the matchups in the NHL conference finals, I felt like I had traveled back to the mid-1990s.

In the East, you have two teams that heavily dislike each other, going back to an epic matchup back in 1994 that went seven games, was won in double overtime, and that eventually led to the Rangers hoisting the Stanley Cup for the first time in more than 50 years. The Devils would then bounce back and win their first title the following year.

Another interesting fact is that the ageless wonder Martin Brodeur is still the Devils’ starting goalie. I wondered at the start of the playoffs if he had anything left in the tank and I guess he has more than I thought considering he’s one step away from another Finals berth.

So far, each team has won a game apiece, which indicates that this series will probably go six or seven and each team will have to do a lot to move on.

The Rangers will need to score fast and keep their scoring balanced. It’s worked for them all year and there aren’t any signs that it won’t work now. Also, their power play was awful in the second round against the Capitals (4-of-25) and that was against an inexperienced goaltender. Now they will be facing arguably the best goaltender of all time — even if Martin Brodeur is in the twilight of his career — so it won’t be easy.

The Devils are a more talented team offensively, but are dealing with an ailing Ilya Kovalchuk. He has been able to fight through the pain so far, but they will need players like Zach Parise and Patrik Elias to pick up the slack if he slows down any further. They will also need Brodeur to continue to turn back time and keep pace with the younger Henrik Lundqvist. If he starts to hit the skids, the Devils could go out quickly.

New York had a great regular season, but struggled badly to put away two weaker teams in Washington and Ottawa. I think the Devils’ offensive talent and sound defense pushes them into the Finals for the first time since they won it all back in 2003. Devils in 7.

Another sign that we might have gone back in time is the fact that the Los Angeles Kings are playing their best playoff hockey since Wayne Gretzky led them to the Finals back in 1993. During that magical run, the Kings dispatched Vancouver and Calgary before outlasting probably the best Maple Leafs team in recent memory in seven games. Even though L.A. would eventually lose to Montreal (three of the games went to overtime), it was still an incredible year for a team that has always come a distant third in Hollywood after the NBA’s Lakers and even the hapless Clippers.

This year, the Kings are on an even greater run. They easily defeated top-seeded Vancouver in the first round and then swept a St. Louis team that seemed poised for a deep playoff run. Now after beating Phoenix on the road twice in the Western finals, L.A. seems to have put that missed opportunity in 1993 behind them and is intent on winning the Cup.

The Kings have done just about everything right so far in the playoffs. They set the tempo quickly, have gotten goals from their star players such as Anze Kopitar and Dustin Brown, and have a Conn Smythe Trophy contender in Jonathan Quick who is compiling a Tim Thomas-esque run so far. If they can keep clicking on all cylinders as they are, the Coyotes could be playing golf very soon.

Speaking of Phoenix, I’m seriously wondering if the city is aware that it has an NHL franchise. The Coyotes won their first playoff series ever this year and got past a talented Predators squad in the second round to get within a sniff of the Finals and people continue to shrug their shoulders. (This is also further evidence that they should have never left Winnipeg in the first place). A friend of mine was at Game 1 and posted a photo online of pregame warmups (about 20 minutes before the puck dropped) and there were maybe 1,000 people there. Also, what’s the deal with the whole “white out” thing? The team wears red at home so it looks really weird and it just shows how out of place the team is in Arizona when management has to market something like that to get people to show up.

Despite their fans’ ambivalence, the Coyotes have had a surprisingly impressive season considering their stellar goalie Ilya Bryzgalov left town and is now befuddling Flyers fans with his philosophical thoughts and inconsistent play. Mike Smith has stepped in and has provided lots of stability in the net as he outdueled Nashville’s Vezina Trophy candidate, Pekka Rinne, and anchored the defense.

Phoenix has also shown it can contain talented offenses like Chicago’s and can force them into making uncharacteristic mistakes. Captain Shane Doan has provided leadership, and he and Martin Hanzal both scored two goals in the second round.

For the Coyotes to turn this series around, they will need Smith to be able to kick his game up a notch to keep up with Quick (no pun intended) and they will need to find a way to stop Kopitar and Jeff Carter, who blitzed them for a hat trick in Game 2. It definitely won’t be easy, but they will also need to get the puck past Quick early and consistently.

The Kings have been the toast of the playoffs so far and I can’t remember an eighth seed being as dominant as Los Angeles. The Coyotes were dealt a harsh blow in losing Hanzal to a one-game suspension for boarding Dustin Brown in Game 2 (that shutout didn’t help either), and L.A. should be able to end Phoenix’s run pretty quickly. Kings in 5.

Sweet Dreams Are Made Of This