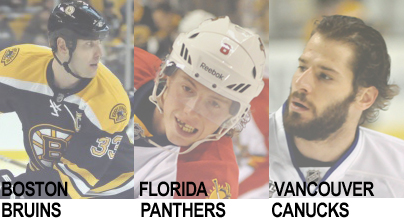 The puck drops on the 2012 Stanley Cup Playoffs in a few hours. The cast of characters includes some new faces (Brian Elliott), some familiar faces (Sidney Crosby), and some faces that are just plain old (Nicklas Lidstrom).

AllPuck.com breaks down each of the first-round series, and offers its first prediction for a Stanley Cup champion.

Despite not having a player in the top 14 in league scoring, New York controlled the Eastern Conference from nearly start to finish. Much of that success was due to the stellar season of goaltender Henrik Lundqvist (39-18-5, 1.97 goals against average, .930 save percentage), and the play of key blueliners such as Dan Girardi, Michael Del Zotto and Ryan McDonagh.

Even though Ottawa limped into the playoffs, it’s been an impressive comeback season for Jason Spezza, Milan Michalek and Daniel Alfredsson. But the biggest difference-maker for the Senators is likely Norris Trophy finalist Erik Karlsson, whose 19 goals and 78 points ran away with the defenseman scoring title. The only playoff questions that remain for surprising Ottawa revolve around struggling goaltender Craig Anderson and the team’s lack of scoring depth.

Prediction: In a battle between maturing squads, New York will take the series in five games due to their overall depth and the stellar play of Lundqvist in goal.

The defending Stanley Cup champion Bruins return to the postseason playing some of their best hockey of the season. Much of that has to do with the resurgence of goaltender Tim Thomas (35-19-1, 2.36 G.A.A. and .920), and the elite two-way play of forward Patrice Bergeron (plus-36, 64 points). The Bruins are physical, deep, have one of the league’s best defensive corps led by Zdeno Chara and are battle-tested. The only worry is that Boston might not be as motivated as they were a season ago.

Few teams enter the playoffs with more question marks than Washington, which fought off a late challenge by Buffalo to grab one of the league’s last playoff spots. The Capitals, who are still missing goaltender Tomas Vokoun, are finally near full health with the returns of forward Nicklas Backstrom and defenseman Mike Green. However, Washington’s success will require a monster playoff performance by Alex Ovechkin, whose 65-point regular season total was by far the lowest of his career.

Prediction: The Capitals will push the Bruins, but Boston’s experience and superior goaltending should win out in five games.

With a completely retooled roster, Florida returned to the playoffs for the first time since 2000, finally giving hockey fans in Miami something to cheer about. Though the Panthers lack elite scorers, Tomas Fleischmann (team-leading 27 goals and 61 points), Stephen Weiss and Kris Versteeg are all capable offensively. The biggest difference for Florida is the play of their defense, led by one of the league’s best comeback stories in Brian Campbell (53 points and 30 power-play assists, second in the NHL), along with maturing youngsters Dmitry Kulikov and Jason Garrison.

The dynamite offensive trio of Ilya Kovalchuk, Patrik Elias and Zach Parise give New Jersey a surprising amount of firepower heading into the playoffs. They are complemented by a solid defense built around rookie Adam Larsson and veteran Marek Zidlicky, a recent castaway by Minnesota. But the heart of the story for the Devils continues to be Martin Brodeur, who at age 39 posted 31 wins and a 2.41 GAA last season.

Prediction: On paper this series should favor the Devils, who are looking to enjoy one last playoff hurrah with Brodeur, Parise and Kovalchuk. New Jersey will dispatch the Panthers in six games.

Revamped Philadelphia has found a go-to scorer in Claude Giroux, who racked up a stunning 93-point campaign that permitted fans to forget about jettisoned stars Mike Richards and Jeff Carter. Goaltender Ilya Bryzgalov (33 wins) was brought in to shore up the team’s shaky goaltending, but injuries to key players Danny Briere and Chris Pronger leaves Philadelphia vulnerable heading into the playoffs.

Prediction: This might be the toughest series of the playoffs for Pittsburgh, as Philadelphia matches up well with the Penguins — especially on Pittsburgh’s home ice. However, with their superior depth, the Penguins should take the series in six games.

After a trip to the Stanley Cup finals last spring, Vancouver won the Presidents Trophy and again entered the playoffs as a favorite to capture the franchise’s first Stanley Cup. However, with Henrik and Daniel Sedin (who will miss Game 1 due to injury) and Ryan Kesler all off of their usual scoring pace, the Canucks hardly feel like the Western Conference juggernaut they were a season ago. It doesn’t help that coach Alain Vigneault has tough choice of who to start in goal between Roberto Luongo (31 wins in 55 games, 2.41 G.A.A.) and Corey Schneider (20 wins, 1.96 G.A.A., .937 S.P.).

Though Los Angeles remains offensively inept (29th in the NHL in goals scored), the Kings present a dangerous first-round opponent because of their defensive prowess (second in the NHL in goals against), led by Vezina Trophy candidate Jonathan Quick (35 wins, 1.95 G.A.A., .929 S.P.) and blue liners Drew Doughty and Willie Mitchell. Though the Kings struggle to score, forward Anze Kopitar (team-leading 76 points) and Flyer castaways Richards and Carter remain offensive threats.

Prediction: With a healthy and productive Richards and Carter, the Kings will shock overrated Vancouver in seven games.

St. Louis represents the best story of the 2012 season, coming out of nowhere to win the Central Division and nearly claim the top spot in the NHL. Coach Ken Hitchcock’s squad is maturing behind talented youngsters David Backes (team-leading 24 goals, 54 points), T.J. Oshie, Alex Pietrangelo, Kevin Shattenkirk and David Perron (42 points in 57 games), who are all coming into their own. But what makes the Blues dangerous is their goaltending tandem of Brian Elliott (nine shutouts, 1.56 G.A.A., .940 S.P.) and Jaroslav Halak (26 wins, 1.97 G.A.A., .926 S.P.) — either of whom could carry St. Louis a long way.

Meanwhile, after an underachieving regular season, San Jose limped into the playoffs despite featuring a roster that includes the likes of Joe Thornton (team-leading 77 points), Logan Couture (team-leading 31 goals), Patrick Marleau and Dan Boyle. But for Sharks fans to forget the team’s season-long funk, forwards Michal Handzus and Martin Havlat, along with 2010 Stanley Cup-winning goaltender Antti Niemi, have to play better.

Prediction: Playoff-tested San Jose will give the inexperienced Blues a run for their money in the first round. But St. Louis is playing too well to stumble here and will take the series in seven games.

Thanks to a late surge, Phoenix enters the playoffs as the surprising Pacific Division champions despite the deck stacked against them: Owned by the NHL, operated on a meager payroll, and playing in front the league’s smallest crowds. The Coyotes find success because of quality two-way players like forwards Ray Whitney (team-leading 77 points), captain Shane Doan and top defenseman Keith Yandle (43 points). Coach Dave Tippett also gets the most out of reclamation projects like forward Radim Vrbata (career-high 35 goals) and goaltender Mike Smith (38-18-10, 2.21 G.A.A., .930 S.P.).

It’s been a roller coaster season for the 2010 Stanley Cup champion Blackhawks, which endured forgettable seasons by forward Patrick Kane and goaltender Corey Crawford. However, with a return to health of captain Jonathan Toews and excellent seasons from both Marian Hossa (team-leading 77 points) and utility specialist Patrick Sharp (team-leading 33 goals), experienced Chicago will be a dangerous out in this year’s playoffs.

Prediction: Even though Chicago enters the playoffs as the Central Division’s fourth-best team, the Blackhawks have the most favorable matchup of any of those four teams in the first round. If both teams are healthy, the Chicago is the clear favorite in every category except goaltending, which should be enough to prevail in six games.

There is no question that Nashville went all-in this season to push for the Stanley Cup. The Predators are built for a deep postseason run thanks to one of the league’s top defensive units featuring blue-line studs Shea Weber (team-leading 10 power-play goals, 49 points) and Ryan Suter, and one of the best goaltenders in the business in Pekka Rinne (43-18-8, 2.39 G.A.A., .923 S.P.). Though Nashville lacks go-to offensive threats, the Predators are stocked with scoring threats on every line.

Perennial playoff mainstay Detroit enters the postseason as a dangerous five-seed as a team with experience, talent and leadership, all key components of championship squads. The only things that held the Red Wings back during the regular season, were an abysmal 17-21-3 record away from Joe Louis Arena and key injuries to forward Pavel Datsyuk, aging defenseman Nicklas Lidstrom and goaltender Jimmy Howard (35 wins, 2.12 G.A.A.).

Prediction: Just like in the Eastern Conference, the 4-5 matchup in the West features a pair of Stanley Cup contenders in Nashville and Detroit. Because of their health and pure desperation, the Predators will knock out the Red Wings in an epic seven-game series.

In the East, Pittsburgh eliminates New York in seven games, while Nashville sweeps St. Louis in the West.