One year later and the mind is still numbed at the very thought, how the lives of 44 members of hockey’s global family could be snuffed out in an instant.

Words – fluent and articulate, moving and mournful – have poured forth like a torrent of tears at the advent of the first anniversary of the Lokomotiv air tragedy.

Words have housed a host of tones in the 366 days since the news emerged from the woods near Yaroslavl that something terrible had happened to the aging, wheezing YAK-42D which was to ferry Lokomotiv to its KHL season opener with Dynamo Minsk, less than a minute after takeoff.

Words of shock and disbelief at the horrific news.

Words of contradiction – at first it was reported in error that former NHL veteran d-man Ruslan Salei had cheated death by planning to meet the team in Minsk.

Words beseeching the Almighty to give rest to the souls of the victims, and comfort to the many mourners left behind. 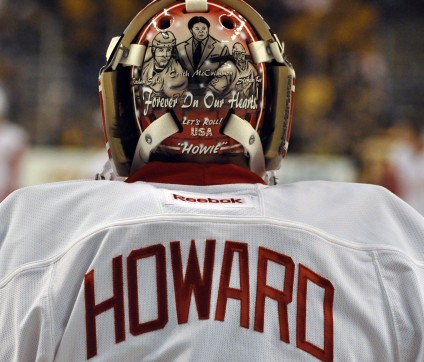 Words of anger when pilot error was ruled to be responsible. Words of grief emanating from throughout the hockey world. Everybody knew somebody who was aboard — a former teammate, a one-time opponent, a forever friend. 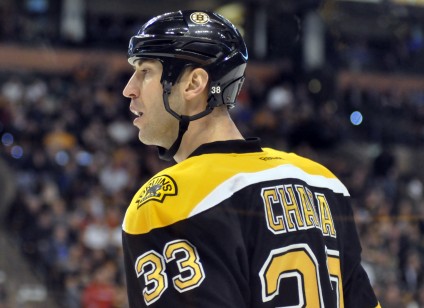 Some of Pavol Demitra's friends in the NHL, including Boston Bruins defenseman Zdeno Chara, wore a 38 sticker on their helmet in his memory | Photo by Dan Hickling

Now more words. To keep the memory alive. To help with the healing. To prove that unlike flesh and bone – or metal and glass – the spirit cannot be crushed.

On the other hand, young winger Alexander Vasyunov managed to see action in just 18 NHL contests, all of them with New Jersey in 2010. 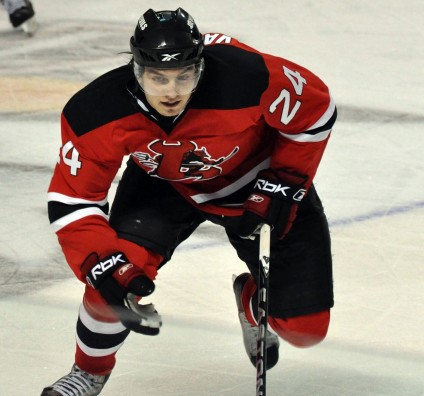 He broke into the Devils system two years earlier with another hopeful, defenseman Tyler Eckford, who has since hooked on with the Ottawa Senators.
The two became friends and roommates, both in Lowell (AHL) and, briefly, in Jersey.

I asked Eckford about Vasyunov a few months ago, and his remembrances were both fond and forlorn.

“He was a great kid,” Eckford said. “It’s a shame when a tragedy like that happens. I guess it could happen to anyone, but it’s a real shame. He was such a great kid. I’m sure all the guys on that plane were great people.” 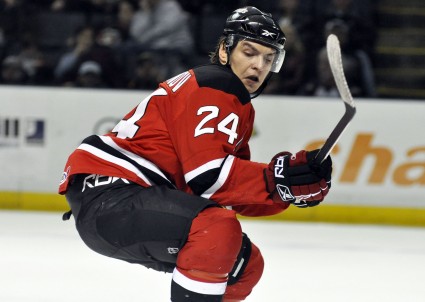 The news as it filtered out of Russia struck Eckford much as it did everybody else. He said it was all too surreal at first, but it soon sank in when he learned that Vasyunov, who was only 23, was aboard the ill-fated flight.

“I remember watching it on CNN and seeing his name,” he said. “It hit home. When you have a connection with somebody that was on that plane … I was with him for a long time and it’s a hard thing to talk about. He would have had a great career and was a great young man.”

Both players were called up by New Jersey in late October of 2010 to make their NHL debuts. Eckford stayed for just four games before being sent back to Albany, while Vasyunov’s stay lasted a little longer, 18 games. Eckford said that Vasyunov became more outgoing as he made the adjustments to language and culture.

“He was a funny guy and liked to joke around,” he said. “Whenever he was on the ice, he was always positive. There was never negativity. He was always nice to be around.”

Like everyone else in the sport, Eckford has logged more miles, boarded more buses, buckled more seat belts and put his own life in the hands of others, more times than he can count.

He’s said he’s left with a feeling of amazement that with all of those teams making all of those road trips, there aren’t more tragedies like Yaroslavl, even the Albany River Rats’ bus rollover years ago on the Mass. Pike back in 2009, which fortunately claimed no lives.

“You just have to be thankful,” he said. “We’ve traveled so much. On buses and planes. Knock on wood, there haven’t been that many tragedies. It’s definitely something to be aware of.” 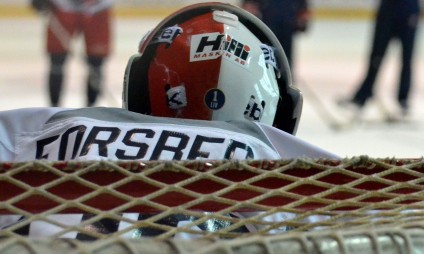 Goaltender Anton Forsberg wore a Stefan Liv sticker on the back of his goalie mask. | Photo by Dan Hickling