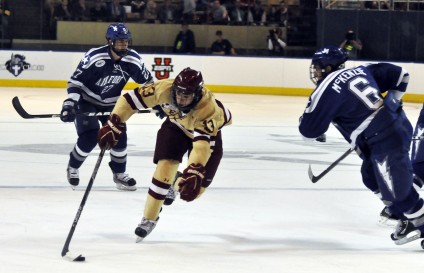 The college hockey season got underway this week with many interesting storylines. The largest: Realignment.

Next season, there will be two new conferences, the Big Ten and the National Collegiate Hockey Conference (NCHC). This is the last season of the CCHA, whose “leftover” teams will merge with those from the WCHA. Notre Dame and Connecticut are leaving their conferences, while Alabama-Huntsville is desperately hoping to save its program by finding a conference to call home.

That mess is still a year away. Here are my predictions for 2012-13 — how each teams will finish in its conference, along with which three teams have a chance to win it. The two independent teams, UAH and Penn State, will have rather difficult seasons and miss the NCAA Tournament.

Atlantic Hockey is now the smallest of the five conferences, but its teams have built quite a reputation as giant killers in the NCAA Tournament — Holy Cross, Air Force and RIT have all staged big upsets. Air Force has been dominating the conference, winning it five of the past six titles. This year should be a lot more competitive.

1. Air Force: It’s going to be a more difficult path for the Falcons this season. Many of the teams have gotten better, but the Falcons are still one step above anybody else. Head coach Frank Serratore always has his team ready to go, Jason Torf is a good goalie, and John Kruse and Kyle De Laurell give Air Force two scoring forwards.

2. Niagara: The Purple Eagles were the best second-half team in the conference last year and return a great scorer in Chris Lochner. The question will be who will be the goaltender? Niagara has three possibilities but, if they can get that narrowed down, don’t be surprised if the Purple Eagles unseat the Falcons.

3. Bentley: RIT, Mercyhurst, Robert Morris and UConn could have also filled in this spot, but the Falcons get the edge after a stellar last season which earned lots of postseason awards. This year’s team looks even better with Rookie of the Year Alex Grieve, scoring champion Brett Gensler and goalie Branden Komm. If they can put up the same stats as last year, the Falcons could be the team to beat.

The Eastern College Athletic Conference is stocked with posh private schools that many wish they got into for college, but didn’t. Don’t let the names fool you, though. They can all play good hockey and thanks to Union’s Frozen Four run, the conference has finally dispelled its reputation as chokers in the NCAA Tournament and the nickname “The Easy AC.”

1. Union: The Dutchmen are the current kings of the ECAC after last year’s big Frozen Four trip. They return one of the best goalies in the country in Troy Grosenick, 20-goal scorer Daniel Carr and 30-point forward Wayne Simpson. Unless they screw up bad, the conference title will be in Schenectady next spring.

2. Cornell: The last couple of years, the Big Red seemed to be the only team who could keep up with Union. That’s not the case this season, but they are still the Dutchmen’s biggest threat. Cornell has a long history of great goalies (Ken Dryden, Ben Scrivens, David McKee) and Andy Iles has the ability to join that list.

3. Harvard: The Crimson finished strong last season and have the depth to compete with Union and Cornell. The question is, will goaltending trip them up? Raphael Girard and Steve Michalek have been a shaky tandem.

Hockey East has emerged as the nation’s best overall hockey conference, producing four out of the last five NCAA champions. It’s hard to say if that will last next season with the Big Ten and NCHC coming in to play, but for now it still sits at the top.

1. Boston College: College hockey fans are probably tired of seeing this team hoist the national title every other year (I am) but they can’t deny the fact that the Eagles and head coach Jerry York are the best in the country. This year’s team will be led by goalie Parker Milner and speedy forward Johnny Gaudreau and should win the conference fairly easily.

2. Massachusetts-Lowell: The Riverhawks had a breakthrough season last year, making the NCAA Tournament for the first time in 16 years and almost making the Frozen Four. Goalie Doug Carr, Rookie of the Year Scott Wilson and leading scorer Riley Wetmore will lead this squad.

3. Boston University: It wasn’t a pretty season last year for the Terriers, with rape allegations against players begetting rumors that head coach Jack Parker had lost control of the team. Still, BU was able to make the NCAA Tournament and gave Minnesota a good fight in the first round. This year’s squad looks solid on defense and should score goals, but how it will finish will depend on if the Terriers can find a replacement for goalie Kieran Millan.

It’s the end of the road for the Central Collegiate Hockey Association as Michigan, Ohio State and Michigan State will be leaving for the Big Ten after this year, Notre Dame will join Hockey East, Miami and Western Michigan will join the NCHC and everyone else will join the WCHA. It will go out with a bang though as the five teams have a good chance to capture the title.

1. Western Michigan: If you want a team on the rise, the Broncos are it. Almost non-existent for year, WMU has made the NCAA Tournament the last two seasons and won the conference tournament last year. The Broncos return a great goalie in Frank Slubowski along with star Dan Dekeyser and look like the team to beat.

2. Michigan: Boston College may be the best team in the land, but the Wolverines are the most consistent. Head coach Red Berenson has taken his squad to the NCAA Tournament 22 years in a row and there’s no sign that streak will end anytime soon. The Wolverines have a strong defense and always have oodles of firepower, but goalie Jared Rutledge will have big skates to fill now that Shawn Hunwick has left.

3. Bowling Green: Yeah, I said it. Just a couple of seasons ago, the university was thinking of dismantling the once-proud Falcon hockey program. The team has responded by routinely pulling upsets in the conference tournament. I think this is the year the Falcons put all the pieces together; as long as they can play a solid three periods of hockey, they will make the NCAA Tournament.

In one year, the most competitive league in college hockey, year in and year out, will look vastly different. Minnesota and Wisconsin will move to the Big Ten while North Dakota, Denver, Colorado College, Minnesota-Duluth and St. Cloud State head to the NCHC. The smaller programs in the CCHA will then combine with the leftover WCHA teams to create one big conference. There are a few teams that stand out above the others this year, but the title should be up for grabs up until the final weekend of the regular season with maybe eight points separating third place from tenth.

1. North Dakota: This was a real toss-up between the Fighting Sioux and Minnesota, but the Sioux look to be more stable in net with the combined tandem of Clarke Saunders and Zane Gothberg, so I give them the edge. Highly touted NHL draftee Rocco Grimaldi is finally healthy and should be fun to watch. If you combine Grimaldi with Danny Kristo, Corbin Knight and Carter Rowney (all finished with more than 30 points), the Sioux should be hoisting the McNaughton Cup in March and should also be in the Frozen Four.

2. Minnesota: The Golden Gophers look stacked this year with returning stars Nick Bjugstad, Kyle Rau and Zach Budish (all finished with more than 30 points), so stacked that many are already penciling them in for a trip to Pittsburgh in April. However, goaltending will be a big question mark with Kent Patterson gone and the combined playing time for Minnesota’s other four goalies being only 20 minutes. I think it will keep the Gophers from winning the title but it shouldn’t stop them from getting to the Frozen Four.

3. Denver: There’s a lot of talk about Wisconsin this year, but I think the Pioneers will be better. They lost key players in Jason Zucker and Drew Shore, but retain forward Ty Loney and goalie Sam Brittain, which should get the Pioneers back into the NCAA Tournament.