Introducing the most famous name among 2014 NHL draft prospects. 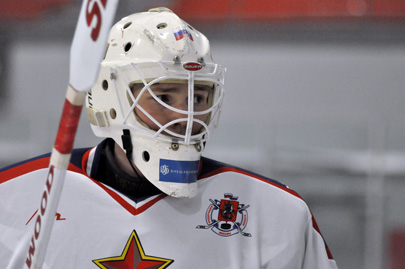 SACO, Maine – The name, the legacy, even the very number. All of it a load gladly born on the broad shoulders of a 16-year-old-goaltender, Maxim Tretiak.

Does that last name sound familiar? It should.

In Russia the name of Vladislav Tretiak is legendary. North America, too: Member of the Hockey Hall of Fame; the Gold standard (Olympic and otherwise) in goaltending during heart of the Cold War; the backbone of those mighty Russian Central Red Army juggernauts.

Now the question is, does the apple (or the grandapple, as it were) fall from the tree?

Tretiak was in Maine this month with his Red Army (CSKA) U-16 teammates, taking part in the World Selects Invitational tournament, which showcased many of the elite 1996-born players from around the globe.

Red Army proved to be the best of the 14-team field, which featured teams from six countries. 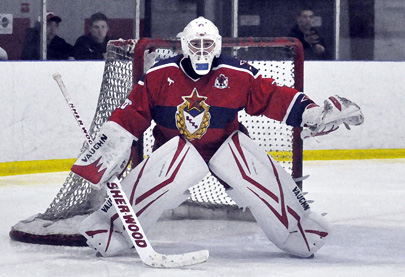 College coaches, junior hockey scouts, as well as talent hunters from NHL clubs were on hand to identify and evaluate players such as Tretiak, most of whom will be eligible for the NHL draft in 2014.

Tretiak, who said he had never been to New England before, was eager for the chance to strut his stuff.

“I really want the (NHL) scouts to check me out,” he said, “and put me on the (watch) list. I’m trying my best to get them to notice me. I’d really like to be put on their list.”

Any family name can be something of a burden for a young man attempting to carve out his own identity.

“When I was young, about 4 or 5,” he said, “I used to play out (as a skater). But it was my decision, after a while, to become a goaltender. My parents and grandpa bought me the equipment.” 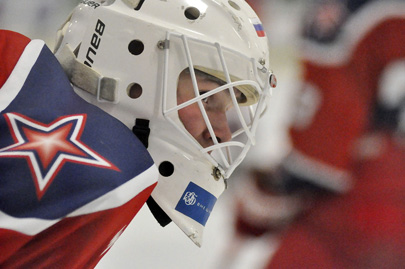 Bought it, and replaced it, after several growth spurts left Tretiak standing a full 6-foot-4 — nearly half a foot taller than his grandfather.

One constant is the number 20, made famous by the elder Tretiak, since passed down to young Maxim.

“When I became a goaltender,” he said, “the club gave me that number right away. I didn’t have to wait for that.”

Although nearly 30 years removed from his own playing career, Vladislav Tretiak, now 59, is deeply involved in children’s charities in Russia. His efforts have raised large sums to help rebuild orphanages, and to provide surgery to correct childhood birth defects.

Still, even though both have extremely busy schedules, the two do find time to connect.

“We don’t see other often,” said Tretiak, who has traveled to the United States and Canada to take part in his grandfather’s goaltending camps. “But when we see each other, we always seem to talk about hockey. About goaltending and how to play. We have great conversations about hockey. I know he’s proud of me.”

In the future, Tretiak said he plans to continue playing in Russia for the next few years. But at some point, he wants to do something his grandfather never did.