In L.A., heavy is the head that wears the crown. 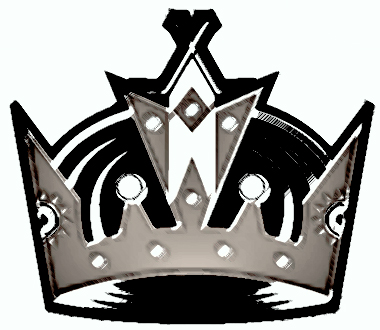 Betty Grable used to live on my block in L.A. While I’m not sure if Ms. Grable ever got a parking ticket after forgetting to move her Packard by 8 a.m. Wednesday for street sweeping, her career does illuminate some other fickle aspects of Hollywood culture. Grable’s mother lied about her daughter’s age to get the 12-year-old actress her first role – in blackface – in 1929’s Happy Days. Grable’s last role might have been in Joseph Mankiewicz’s 1956 screen adaptation of Guys and Dolls, had she not skipped a meeting with producer Sam Goldwyn because her dog hurt its paw; the part of Adelaide went to Vivian Blaine instead. Grable never again graced the silver screen and died in 1973.

The usual Hollywood rules rarely apply to Los Angeles’ entry in the National Hockey League. With one exception in 45 years, Kings players haven’t achieved mainstream celebrity status. Their team headquarters are located in the beachside suburb of El Segundo, which feels a world apart from Sunset Boulevard even if it’s only 12 miles down the road on paper. Most players live in the surrounding area, nestled against the Pacific Ocean and away from the spotlight.1 This is part of the reason why outside pressure on the team is relatively minimal. Another reason: The team has never won a Stanley Cup and, except for the 1992-93 season, could never reasonably expect to.

Recently, however, the rules changed. It was a sweeping change, but it coalesced in increments, from Anze Kopitar to Dean Lombardi to Jonathan Quick to Drew Doughty to Mike Richards to Jeff Carter.

There is pressure now. Expectations won’t permit a third straight first-round playoff exit. Small mistakes by players, coaches and management are being magnified. Wins can no longer gloss over inexcusable losses, of which there have been many.

The net result is that the next three months will either invigorate or alienate the core of the team’s fan base – with no middle ground in sight. The Kings are either a 12-year-old Betty Grable in blackface, the world suddenly at her fingertips, or a fading actress with a sick dog who will never work in this town again.

It’s that time of year when the Kings mail out their season-ticket renewal notices. If you received one, chances are you weren’t happy.

This is part of an e-mail I received from one Kings fan last week:

“We have 4 season seats in the 300 section which are going from a total of $3700.00 to $5777.00. That is a 64% increase. On top of a 15% increase the year before, that is a total of over 88% in two years. We have held season seats for 21 years and are loyal fans. I do not want to give up our seats and would have understood a reasonable increase, but this is plainly a case where the Kings want to oust us. Loyalty only seems to go one way with this outfit.”

A few days later I got this from another fan: “My friend with whom we have season tickets and have supported this team since year 1 in 1967, informs me that next years [sic] tickets will increase from $23.00 to $35.00. I asked him if we were moving down to the 200 level and his response was no…”

These are excerpts of two people’s experiences, but I’ve heard or read similar complaints from many more. A lot of folks simply aren’t able, let alone willing, to spend $5,700 on the same thing they bought last year for $3,700.

So why the price hike?

The Kings are currently operating at a salary-cap payroll of around $63.7 million. That’s roughly $20 million more than the team was spending in 2008-09 – a steady climb out of the ghetto and into the penthouse. Someone has to foot that bill and the NHL isn’t bailing out Phil Anschutz. Not as long as Glendale and Columbus still have franchises, at least.

For embittered fans, their pain was not eased when the rival Anaheim Ducks simultaneously announced that their season ticket costs will either be reduced up to 35 percent or remain the same next season. The Kings managed to identify and implement the one surefire method of pissing off fans, along with losing.

Oh, by the way, they’ve been losing too.

Prior to beating the bumbling Blackhawks on Saturday, the Kings had lost four straight (and six of seven) to temporarily fall out of the Western Conference’s top eight. Quick, whose won-loss record would make him a Vezina Trophy candidate on any other team2, was on the losing end of consecutive 1-0 games to Phoenix and Calgary at home last week. A team with one of the game’s most creative offensive defenseman (Doughty), a center (Kopitar) with the best hands this side of Pavel Datsyuk, and five other former 30-goal scorers, not including the recently acquired Carter, ranks last in the NHL in scoring.

How could this happen? In increments.

• Kopitar and Richards are fine centers, but there isn’t much scoring help on the wings. When healthy, Justin Williams and Simon Gagne aren’t the same players they were when they were scoring 30 goals a season. Also, Gagne is out indefinitely with a concussion. Brown’s 30-goal season was a cosmetic one; that was a bad team and Brown was racking up minutes and points by default. Still, to his credit, Lombardi recognized this and traded for …

• Dustin Penner. He was heralded as a major acquisition in February 2011, but ever since Penner has played like the trade-deadline fallback option he was. The reality is that nobody wanted to pay Edmonton the asking price for Ales Hemsky (the Oilers’ leading scorer at the time) and so Lombardi settled for Penner, perhaps in part because his Western Conference rivals were loading up. Sixty-five games, one pancake-related injury and seven goals later, that looks like an awful move. Of course, Lombardi wouldn’t have had to deal for Penner if only the Kings had gotten enough out of Marco Sturm, Andrei Loktionov, Scott Parse, Alexei Ponikarovsky, Alexander Frolov, Teddy Purcell, Patrick O’Sullivan, et. al.

• An overly simplistic offense. A system doesn’t have to be complicated to be effective, but one way to make life easier on your opponent is to have one player stand in front of the opposing goalie, have another shoot, have the other three hang back near the blue line, and repeat this for 60 minutes. Maybe that’s a tad crude, but the condensed truth is that the Kings play a predictable and uninspiring brand of offense. There’s a reason guys like Purcell and Matt Moulson became top-six forwards in Tampa Bay and Long Island, respectively, after languishing in L.A. The system doesn’t make it easier to score, only harder.

• Darryl Sutter. The jury is still out on Sutter 31 games into his new job, but he has the power to effect change and hasn’t seemed to seize it. This could be the most troubling aspect of all. The Los Angeles Times reported in December that Sutter’s contract “covers this season and two more with contingencies for the possibility of a lockout next year.” Can he successfully adapt the Kings’ system to its expensive personnel in time for the playoffs? The answer to that one question will determine whether or not the team can justify its ticket-price hike with a Cup run. Hey, no pressure Darryl.

The Jeff Carter-for-Jack Johnson trade should work out splendidly. Johnson was, statistically speaking, the team’s least dependable defenseman. Carter, when healthy, was always productive on the ice in a Flyers uniform. As was the case in Philadelphia (but not Columbus), he doesn’t have to be the savior in Los Angeles. He can be the team’s third-best forward and the Kings will be OK, though given his skill, Carter should be the team’s top goal scorer at some point between now and the time his contract expires in 2022.

But that’s the same optimism many felt at the time of the Richards trade. And the Penner trade.

And whatever success the Kings have with Carter – who needs to keep his nose clean with his old drinking buddy close by – should not obscure the smell of desperation surrounding his acquisition. The front office put the horse before the cart by charging a fortune for season tickets before the team won a single playoff round, assuming that money can buy you a championship-caliber team. For the first five months of the season, it hasn’t.

1. Sean Avery is an exception to this rule, but that is not news in any context.
2. Quick has managed to lose eight times this season when allowing one goal or shutting out the opposition. In his 26 losses, the Kings have scored 29 goals.