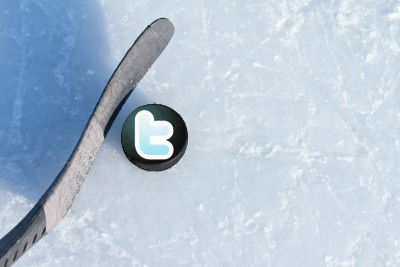 At 8:30 this morning, a high-pitched alarm went off, my eyes reluctantly fluttered open, I reached for a phone, turned off the alarm, and headed off to work – all from the comfort of bed. Yes, my smartphone is so smart that in a matter of seconds it wakes me up and gets me to work. This is The Future, and I am George Jetson hitting the treadmill, half asleep.

As a hockey writer in 2011, getting to work means launching Twitter on a smartphone. Open a window and you’re flooded with the motley mircomusings of Paul Bissonnette (@biznasty2point0), Michael Grabner (@grabs40) and Ryan Nugent-Hopkins (@RNH_93), to name a few players. The cast of National Hockey League actors on Twitter also includes a general manager, Mike Gillis of Vancouver (@GMMikeGillis); a head coach, Ron Wilson of Toronto (@coachrw63); and well-connected skating coach Derek Popke (@derek_popke) – an underrated follow.

More than an app, Twitter is a big-picture social phenomenon. Having access to an immense social network appeals to some core aspects of human nature. We can measure our popularity in Followers, our productivity in Tweets, and our connectedness in terms of the number of people we follow. If you’re on Twitter, and claim not to care about these metrics, you must not be human.

Yet even as it elicits our primal urges, Twitter is also fundamentally changing the rules by which we communicate. (That sentence right there is probably a better topic for a college course than an essay; after all, even “Who’s the Boss” can be stretched out for an entire semester.)

To comprehend the value of Twitter on a smaller scale, just look at how hockey fans, players, and writers like me are using it. In the span of a few hours one recent afternoon, the following things actually happened:

2. A reporter used Twitter to report that minor-league defenseman Jason Fredricks would miss four to six weeks with a knee injury. Fredricks re-Tweeted the reporter’s Tweet to inform his 83 followers of the injury.2

3. Fredricks himself announced that he was driving from suburban Los Angeles to Tijuana with teammate Francois Brisebois. A pre-med student at Colgate University, Brisebois is nearly a doctor in addition to being a fine hockey player, but needed to go to Mexico to get a United States P-1 (work) visa.

None of this seems normal: A woman in Chicago is instantly famous around the world for distributing an image of a nude hockey player from Vancouver. A player relays information from a sports writer about his own injury. Two players announce they’re driving to Mexico in the middle of the night, in the middle of training camp. All thanks to Twitter.

And, not insignificantly, all because of hockey.

There’s a guy in Pittsburgh who’s downloaded the Tweets of more than 100 million users for the purpose of Ph.D. research. Slate.com interviewed him and highlighted this important point: “Most people on Twitter have fewer followers than the number of people they’re following — that is, they’re following celebrities, journalists, news organizations, and other big institutions that aren’t following them back.” The author goes on to explain that there are some notable exceptions to this rule; the article focused on black people, who are nearly as likely to follow as they are to be followed back.

Hockey players are a similar anomaly.3

More than their baseball, basketball and football brethren, hockey players operate in a fishbowl industry. Rarely can a player be traded from one team to another without already knowing at least one of his new teammates. The “Kevin Bacon Game,” which proved there’s at least six degrees of separation between Bacon and virtually any actor on Earth, offers less suspense in hockey. Pick any two players from Devante Smith-Pelly to Pelle Lindbergh, and I bet you’ll be connected in three moves. Four, tops.4

And so we have ex-teammates following each other from across the NHL, Tweeting back and forth one night, and beating each other up on the ice the next. This represents another shift in communication, and some NHL general managers don’t like it.

Often, a hockey player will engage his Twitter followers with some behind-the-scenes antics among teammates. Edmonton Oilers defenseman Ryan Whitney has this down to an art form. Sometimes, a player will indulge a deep thought on a deeply personal topic. Other times, he’ll go back and forth with a journalist. Or with a fan, for better or worse. Then-Tampa Bay Lightning goalie Dan Ellis was famously chased off Twitter a year ago by fans who took offense to his commentary on the financial hardships faced by professional athletes.

Inside this fishbowl, the current shifts so frequently and so drastically that each morning I’m compelled to rub my eyes, peer out to sea, and find out just how far we’ve drifted since the night before. Especially with Fredricks and Brisebois en route to Tijuana.

The morning after their midnight ride, I turned off my alarm and found out that Fredricks and Brisebois made it home safe.

1The picture actually appeared in ESPN The Magazine’s “Body Issue,” which is how the blogger got her hands on it (then used her hands to cover Kesler’s face and pretend he wasn’t a Canuck).

2I was the writer. This was the first time in my two-plus years on Twitter that an athlete has ever re-Tweeted something I wrote about him. Would Fredricks have told his followers that he was injured if I hadn’t reported it first? I prefer to think not.

3Ironically, hockey is generally regarded as a “white sport” and with good reason. A total of three people of color played in an NHL game before 1980.

4Lindbergh played in Philadelphia under Mike Keenan, who went to Calgary to coach Curtis McElhinney, who spent the 2010 training camp with Smith-Pelly in Anaheim. Prove me wrong.