Fans of Seinfeld will recall that Cosmo Kramer once penned a “coffee table book about coffee tables,” an over-sized hardback filled with images of celebrities’ coffee tables. 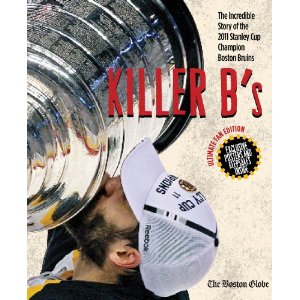 So who would own a copy of “Killer B’s: The Incredible Story of the 2011 Stanley Cup Champion Boston Bruins” (Triumph Books, 2011)?

On the proper coffee table, “Killer B’s” makes the perfect Christmas gift. However, full appreciation of this particular coffee-table book requires a particular audience. The first four pages of photos are from the Bruins’ Stanley Cup parade last June. Either you will feel the immediate connection or you won’t. If you do, the jacket price is listed as $29.95; go hit up the startup bookseller occupying your neighborhood Borders before it goes under.

If you’re an outsider to the latest Stanley Cup hangover, there is value to be found between the covers, though it requires an explanation.

The meat and potatoes of this book, like any coffee-table tome, is the photography. No complaints here: The large, dynamic photos — like the newspaper-sized words filling the spaces in between — were provided by the staff of the Boston Globe. And the Globe, much like any Bostonian, had 39 years’ worth of pent-up ideas ready to pour into the Bruins’ commemorative championship book.

Historically, the Bruins’ championship was unique. As a journalist of the written word or the visual media, this Stanley Cup championship run was one of those stand-alone, life-changing moments that can define your career like it defines the life of a hardcore fan. This was not the case for any Stanley Cup champion of the past 15 years, with one exception. The Chicago Blackhawks, whose 2010 title ended 49 years of hockey futility in the Windy City, inspired some long-winded prose.

A brief recap: Pittsburgh had won the Cup twice before its 2009 championship, and should win at least one more during the Sidney Crosby era. Detroit has been to the finals six times in the past 16 years; there is no hard-luck hockey history in Hockeytown. Anaheim, Carolina and Tampa Bay had joined the NHL too recently to mint their Stanley Cup runs in hardback. When the New Jersey Devils hoisted the Cup in 2003, their fans were remembering where they were three years earlier and it suddenly didn’t seem quite as special. Same goes for the 2001 Colorado Avalanche, whose 1996 title surely softened the euphoria. Dallas’ 1999 title came in its sixth year of existence. The ’96 Avalanche brought Denver its first championship in any major sport, something even the past two Cup champions can’t claim.

Point is, it’s rare to see a Stanley Cup championship transcend hockey. The Bruins’ feat was one of those rare moments, and it comes through here in dynamic fashion.

Kevin Paul Dupont, a writer for the Globe, captures it in his introduction:

An older woman, one who clearly lived through the ’60s and ’70s glory years of Orr and Esposito, Cheevers and Bucyk, surreptitiously broke from the crowd in tiptoed stealth. Holding a small camera with one hand, she inched closer to the obliging Chara and with the index finger of her opposite hand she ever so gently touched the Cup, her entire being seeming to melt upon making contact, and then like a giddy schoolgirl she neatly scurried back to the ranks of the hollering masses.

The prose and photographs are interrupted by facts and figures (my favorite: the $156,679 bar tab racked up in Boston a few days after the decisive Game 7 win) and the occasional Bruins poster — three to be exact. Aside from the frills, you’ll find game-by-game results starting Oct. 9, 2010 with a 5-2 loss to the Phoenix Coyotes in Prague, Czech Republic.  Season-by-season results date back to 1924-25. As an almanac of a championship team’s history, “Killer B’s” more than holds its own.

Not a Bruins fan? Maybe it goes on the bookshelf and not the coffee table, but you have permission to become engrossed.