Eavesdropping on the debate about physicality in the NHL in 2011 is not unlike flipping your TV to an episode of “Divorce Court.” It only takes a couple seconds to gauge the emotional temperature in the room, which usually falls somewhere between “lukewarm” and “Elin Woods.” 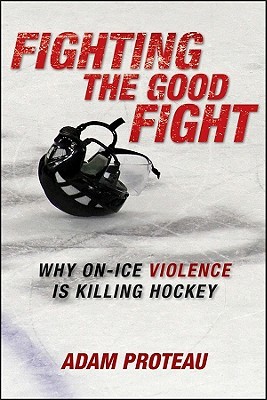 The facts should speak for themselves but they don’t – at least the two parties, charged with emotion, rarely let them. The endgame is clear: They’re breaking up. It’s just a question of who gets what.

An all-out fighting ban? Let’s talk about that.

In “Fighting the Good Fight,” Adam Proteau comes out swinging with the the golf clubs, and he wants the yacht.

He makes a good case for the yacht, too. The facts speak pretty loudly. Let’s review a few, as presented by Proteau:

In sum, the sport of hockey has copious amounts of blood on its hands. It has for a while, in fact. In the prominently quoted2 words of NHL executive Colin Campbell: “We sell hate. Our game sells hate.”

But how much action is the league and its players willing to take to clean up the blood? After laying out the facts, this is the question “Fighting the Good Fight” seeks to answer.

As for what the New NHL should look like, Proteau’s vision is not as specific as it could be. But the basic goal is a sport with penalties for fighting and contact to the head so stiff that players stop raising their fists, elbows, shoulders, sticks, or whatever else might be used as an instrument of destruction. A complete ban on headshots is encouraged (the book went to press before Brendan Shanahan’s reign of televised discipline took effect) and a more European style of play is embraced without shame.

One quote, often suppressed, gets some traction here: “I like the style the Russians play for many reasons. I like it because it can’t help but improve the skills of a hockey player. For too long we’ve had to put violence into our game, fighting and hitting guys over the head with your stick because that’s what the crowd wanted to see. Or what we thought the crowd wanted to see.”

Those were the words of Serge Savard, as quoted by the Montreal Gazette at the time of the 1972 Summit Series. Almost 40 years later, debating the merits of Savard’s argument remains almost taboo. You’re more likely to see a between-periods countdown of the 10 Best Goal Scoring Celebrations on CBC’s “Hockey Night in Canada.” So when, if ever, will the NHL take its final stand against headshots, fights, and other concussion-inducing forms of violence?

Some possible answers are discussed. My guess: As soon as the players stop buying in. The NHL Players’ Association has an opportunity to put its cards on the table when the current Collective Bargaining Agreement expires in the summer of 2012. That’s what makes the timing of “Fighting the Good Fight” so essential.

To show just how extreme the NHL has become, Proteau holds up mixed martial arts as the benchmark for sports with a violent ethic. (The author notes that even the UFC has a stricter concussion protocol than the NHL.) But just for shits and giggles, I’ll one-up the ante: Prison rodeo. Its participants have lost more than just brain cells; they’ve lost testicles. In turn, the event has been decried as inhumane. The warden of Louisiana State Penitentiary (commonly known as Angola) can counter by pointing out that his rodeo is a voluntary event, with a line of volunteers out the door. And therein lies of the crux of the how-violent-is-too-violent argument: You’ll know a sport is too violent when its participants stop signing up.

The comparison between an NHL player and a prisoner serving a life sentence ends there. The NHL is not meant to be a prison, and one common sentiment among hockey players with children and grandchildren is that they want to enjoy their remaining years for more than just themselves. That is threatened by Chronic Traumatic Encephalopathy (CTE), a brain disease found in some retired NHLers, which has been known to incur symptoms of dementia among victims before age 50.

Maybe NHL commissioner Gary Bettman can turn a blind eye to the tragic lessons of Bob Probert, Reggie Fleming, et.al.,  because he does not risk a concussion every time he goes to work3. But Mathieu Schneider no longer can. Neither can Ian Laperriere or David Perron. Suddenly, inconspicuously, a chorus seems to be rallying around Serge Savard, their sentiments amplified as each serious injury — Ryan Miller, Sidney Crosby, Marc Savard — disproves the possibility of coincidence. By airing their grievances in full, “Fighting the Good Fight” lays a blueprint for their allies in the next round of CBA discussions.

And if NHLPA members are adequately educated about their job hazards by the time next summer rolls around, the judge might just hand them the yacht.

1. Given the recent advances in diagnosing techniques, and given the notoriously clandestine nature of NHL injury disclosure policies, I have a hard time taking this figure as gospel.

3. Proteau, in this book and in his day job with The Hockey News, does a fantastic job calling out Bettman’s ignorance.