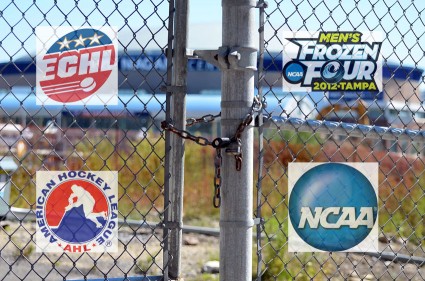 It’s official. Last week the NHL cancelled the first two weeks of the regular season, angering fans across the continent and also keeping me from watching Zach Parise and Ryan Suter play the defending Central Division champion Blues at the Scottrade Center.

As angry as I am that this has happened twice in my lifetime — and twice in the last decade — I’ve decided that, until the millionaires and billionaires grow up and hash out a deal, I’ll get my hockey fix by watching other leagues play. Here are some examples for you to do the same.

For those unfamiliar with the American Hockey League, the AHL is hockey’s equivalent of baseball’s AAA level. Each NHL team is affiliated with an AHL squad and uses its team to rehabilitate their players or develop talented prospects. Why you should watch this season is because it may be your best chance to see NHL players without having to move to Russia or northern Europe.

Nearly 90 percent of NHL players have spent time in the AHL during their careers. Some teams have already shipped players to the minors who were eligible to be sent down without clearing waivers. Buffalo sent Luke Adam to Rochester. Philadelphia sent Erik Gustafsson, Brayden Schenn and Sean Couturier to Adirondack. Carolina sent 2011 Calder Trophy winner Jeff Skinner to Charlotte. Edmonton sent 2011 number-one draft pick Ryan Nugent-Hopkins to Oklahoma City (a bizarre place for a hockey franchise, but hey, Phoenix has a team). The Rangers sent Adam Henrique to Connecticut. More players could still be coming.

It’s not quite the same, but you will see some quality players on the ice as well as some great atmospheres in the building. Some AHL cities like Glens Falls, New York (home of the Adirondack Phantoms) live and breathe for their teams. Sellouts aren’t uncommon in places like Hershey, Pa., where the Bears averaged 9,872 per game last season. The league has some good rivalries such as Chicago-Rockford, Albany-Adirondack, Manchester-Portland and Toronto-Hamilton. It’s definitely a league worth checking out.

A step below the caliber of play in the AHL, the former East Coast Hockey League (now it’s just “ECHL”) is hockey’s equivalent of baseball’s AA. Most ECHL teams are affiliated with one NHL team; some are assigned prospects from multiple teams. This is where a lot of college hockey players get their pro start, and where AHL players are sent to refine their game.

The ECHL is spread out all over the country — Stockton, Calif., Charleston, S.C., Kalamazoo, Mich. Anchorage, Alaska. Talented players to watch include former Division I goalies Mike Lee, Kenny Reiter and Ryan Rondeau as well as scorers Cody Beach and Ryan Flanigan.

If you like to watch up-and-coming players trying to polish their skills to prepare for the next level, the ECHL is perfect for you. Just like the AHL, most cities love their teams and the players are really dedicated to their love of the game instead of money. You probably won’t see any slacking off at this level.

Other than the NHL, this is my favorite level of hockey to watch. The players aren’t getting paid. Sure, they get a free education, but they still go to class and study like the other students on campus.

College hockey has grown in recent years with the Frozen Four — college hockey’s take on the “Final Four” tournament — selling out every year since the Anaheim debacle in 1999. Games are now televised nationally on the NBC Sports Network, CBS College Sports, Fox College Sports and ESPNU. New conferences will also being taking shape next season — the Big Ten Hockey Conference will include Minnesota, Michigan and Wisconsin and the National Collegiate Hockey Conference (NCHC) will include North Dakota, Denver, Minnesota-Duluth and Miami.

If you love rivalries, college hockey has the best. North Dakota-Minnesota, Boston University-Boston College, Denver-Colorado College and Maine-New Hampshire are just a few that get hockey fans’ blood boiling. The leagues also tend to be very competitive each year and the playoffs are almost always filled with drama. The atmosphere is saturated with spirited student sections and loud, talented pep bands.

The season started with exhibition games this past weekend. The Icebreaker Tournament starts in Kansas City next weekend on NBC Sports and NESN. CBS College Sports will start picking up soon as well. If you have nothing to do on a Friday night or are bored with the college football games on Saturday, tune in to college hockey. Trust me, you won’t be disappointed by what you see.

Finally, here’s a nice story for you to enjoy.

The You Can Play project is a movement to try to change the locker-room culture to ensure respect for players regardless of their sexual orientation. Hockey has been one of the largest supporters of the organization. NHL stars like Zdeno Chara, Andrew Ference, Dustin Brown, Ryan Kesler, Ryan Whitney, Steven Stamkos and Brian Elliott are among many who have filmed video spots. So have college hockey programs like Denver, Princeton and Northeastern. The UConn team released two videos, the first stating that its locker room will be safe for all athletes and the second with its captains talking about how about how they will build acceptance of gay athletes. The videos were also covered by the Associated Press as well as the Hartford Courant.

NHL rinks haven’t always been the most hospitable place for diversity. In the last year, we’ve seen homophobic slurs uttered by players, and racist and homophobic tweets sent by Boston Bruins fans after Joel Ward’s game-winning playoff goal for the Washington Capitals. However, things appear to be starting to change and this project is one of the reasons why.

Hopefully more teams and players will stand up to be a part of it because there’s no place for bigotry in sports.