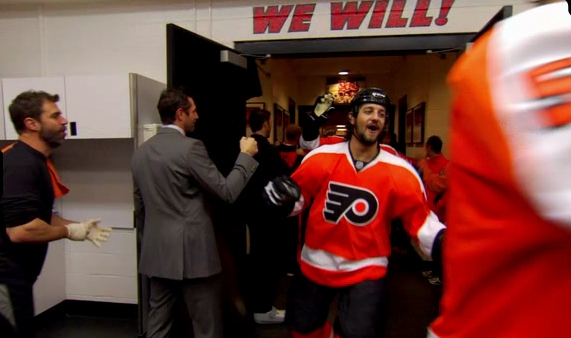 It’s that time of year again. That time when HBO gives me and hockey fans everywhere an early Christmas present: its “24/7 Road to the Winter Classic” series, a present that I’ve been waiting for since last January.

Last year, the Winter Classic featured Sidney Crosby and the Penguins facing off against Alexander Ovechkin and the Capitals. With the two most famous hockey players prominently featured, HBO had a huge hit on its hands.

When HBO decided to add a second season, this time featuring the Flyers and Rangers, some fans including myself were wondering if it would be able to hold up to last season due to a lack of big-name stars.

As it turns out, the series still is lighting the lamp. Liev Schreiber returns to provide great narration and the camera work continues to be great, with lots of close-up shots for fights as well as within the locker room.

The puck dropped last week on Dec. 14. In that episode, viewers were introduced to arguably one of the most interesting players in the NHL, Flyers goaltender Ilya Bryzgalov. Bryzgalov will most likely be the star of this year’s series for his philosophical nature. He has thoughts about the Universe, China and their laws against tiger poaching, and of course, quality Russian alcoholic drinks.

This week’s episode had a hilarious segment in which Bryzgalov was mocked by his teammates who finally saw the previous week’s episode and their goaltender’s thoughts on a wide variety of topics. From here, Bryzgalov decides to compare beautiful women to his Siberian husky. He also admits he has an interesting love-hate relationship with his position. It’s bizarre, but it’s must-see TV.

Music features prominently in the series. Last week, so did a fun segment that showcased how the Flyers celebrated in their locker room after a win which involves everyone dancing and singing to Mac Miller’s “Knock Knock.”

This week’s episode decided to feature REO Speedwagon’s “Roll with the Changes” to describe how the Flyers were accumulating a seven-game winning streak despite the loss of leading goal scorer Claude Giroux and team captain Chris Pronger. I’m not ashamed to admit that I was singing along while taking notes on the episode.

In case you are starting to think that the Flyers are entertaining and the Rangers are boring, you’re only partially correct – the Broadway Blueshirts lack a hilarious Russian goaltender to provide his insights on life. However, the Rangers are also a fun bunch to watch. Head coach John Tortorella, who always seems to be angry at something, goes on some funny rants. At one point in the first episode, he tells his team not to “shit their pants” when facing Phil Kessel. Tortorella also tears the team down for its lack of discipline after the Artem Anisimov “Rifleman” incident.

However, Tortorella shows his softer side in episode two when it is shown that he has befriended a 10-year-old boy with cerebral palsy and provides encouragement to the boy as he goes through various surgeries.

Also in the first episode, the Rangers engage in an entertaining bit of gambling while going out to dinner on the road. Known as “credit card roulette,” the game requires that each person place his credit card in a hat and one by one, each card is pulled out until only one remains. The owner of that unlucky card gets stuck with the tab. (I’ve played this game before with friends when going out to Taco Bell, but never for a bill this price. These guys can afford it.)

Viewers find out in the second episode that Rangers goaltender Henrik Lundqvist (who got stuck with the bill in the first episode) plays guitar to relax and help him get away from the pressure of playing in New York City. He also is preparing to rock out with tennis great John McEnroe (of all people) for a benefit concert later in the season. Thankfully, McEnroe seemed to enjoy the jam session and didn’t verbally assault anyone in the room.

There’s also a great moment in the second episode when an obviously sleep-deprived Brian Boyle struggles with dressing himself.

As entertaining as the series is, it also gives you an up-close look at how teams are coping with certain issues. In the second episode, it is revealed that Pronger is done for the season with severe post-concussion syndrome and the look on head coach Peter Laviolette when he is asked about it at a press conference shows how much the team will miss Pronger’s leadership.

The Flyers are also dealing with the loss of Giroux, who is out indefinitely with a concussion, but the rookies are helping to pick up the slack. However, the Flyers are obliterated by Boston in their last home game before the Winter Classic and head into a five-game road trip as well as next week’s episode on a low note.

On the other side, New York has struggled to put together a good 60 minutes of hockey during this time span and has lost four of six, including an awful game against St. Louis. Tortorella makes sure to emphasize this every time he gets the chance. The Rangers are also dealing with injuries as Marc Staal is also out with a concussion he suffered at the hands of his brother Eric. However, Mike Rupp returns to the lineup against Phoenix and gets into a nice scuffle with Raffi Torres. In the locker room, the officials agree that Rupp has been playing clean and Torres overreacted (another great feature of the series). The Rangers end their losing ways with a goal by Brad Richards that sneaks into the net right before the final horn; Richards is then presented with the Broadway hat.

HBO ends this week’s episode by talking about impossibility and the fact that you never know what the next trip on the ice will bring. I like to think that it also sums up the show very well. It’s been a great ride so far and I highly suggest you tune in next Wednesday night if you haven’t already started.

J.P. Hoornstrahttp://www.jphoornstra.com
I write about the Los Angeles Dodgers for the Southern California News Group and destination travel for various media outlets, including the New York Daily News.
Previous articlePens/Wings: Faces of a rivalry.
Next articleBook Review: “Fighting the Good Fight”.